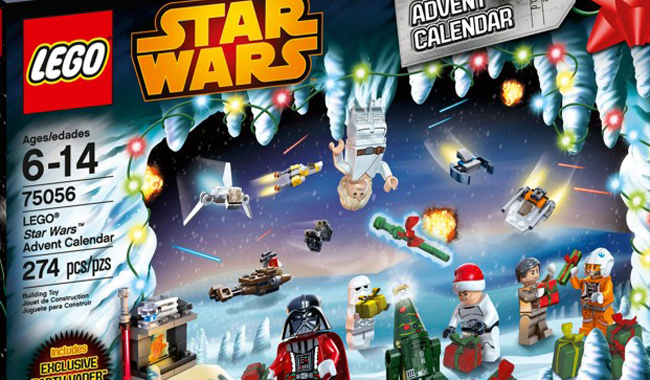 The dedicated Lego Star Wars advent calendar returns for its fourth year in 2014. The format is exactly the same as in previous years. One truly unique minifigure accompanied by mini builds and other minifigures usually picked out from the sets out during the year.

As usual all of the figures and models are already depicted on the box itself, so there is no spoiling of surprise by reading this review. The mini builds are usually pretty simple and the only instructions to each model are on the backside of the advent calendar door. The contents are individually wrapped in plastic bags inside so that no parts should go missing even if the box is mistreated in use.

The mini builds consist of some very nicely designed ships consisting usually only of around 10-15 small pieces each and some additional equipment or scenery mainly in the form of mounted weapons, weapon holders.

As you might expect, if you have bought the calendar for several years, you will see some repetition of designs in perhaps different colours. For example, this year we have the imperial shuttle which appeared in the 2011 calendar yet  is still one of the best designs I have seen.

It’s great to see that the 2014 calendar has brought back more of the original trilogy ships and some of the best designs can be found here. In particular the speeder bike from Return of the Jedi looks great as well as the Snowspeeder, Luke’s Landspeeder and the B-Wing.

The other builds are pretty standard stuff from previous calendars as well as additional scenery from larger sets. The one more memorable piece is the fireplace with two lightsabers attached to it which is quite funny and seasonal at the same time.

The builds are certainly nothing to be scared of. With such few pieces they are easy for anyone to complete barring for the fact that these are the smallest Lego pieces you generally find, so can therefore be a little fiddly and certainly easy to lose if dropped on the floor.

The headline of the 2014 calendar is definitely Santa Darth Vader, with old Anakin finally getting the honours of being Father Christmas. While obviously a novelty figure, the design is superb with full printing on body and legs so that Vader wears a red overcoat and cape with white gloves over his usual black suit. The coat has detailed fur lining and you can still see all the usual Darth Vader print in the torso as well as the leg printing from the latest Darth Vader version coming from the Imperial Star Destroyer set.

Unlike in previous years, the Christmas theme continues to two more figures this year as well. Firstly we have the standard Clone Trooper wearing a Christmas hat instead of the usual helmets. This is a nice fun addition and in case you want to include him in your play in one of the small builds we get a spare helmet for him so that he can easily be converted back to a standard clone trooper if required.

Secondly we get a green R2 style droid whose top half seems to be a Christmas tree. Not sure if we have ever had a green droid figure before, but it certainly looks unique.

The Snowspeeder pilot also seems to be listed as unique, but it seems to just be a generic face version of the Dack Ralter figure that came with the 2014 Snowspeeder (75049) set.

The other figures are all repeats from at least one other recent set. The worst offender is the super battle droid which has appeared in 11 sets so far including the 2012 Advent Calendar. At least this is a pretty generic droid and therefore having an army of them is not going to bother anybody. General Rieekan is possibly worth a second look as he has only appeared in the 2013 Battle of Hoth (75014) set and the Tie Fighter Pilot only in the microfighters Tie Interceptor (73031) set.

The snowtrooper is interestingly the old style trooper again from the Battle of Hoth set and not the new style in the AT-AT and the Snowspeeder sets this year. Luke Skywalker is the same current Tatooine design as in the Mos Eisley Cantina (75052) and Sandcrawler (75059) sets.

The Lego Star Wars advent calendar remains popular as ever among the Star Wars fans and having Darth Vader in the headlining slot is bound to keep this one popular as well. The ship designs as usual are great although the inevitable repetition of designs has already started. Yet, there are still some great new designs here as well that will make December fly by for the builders.

It would have been nice to get another truly unique minifigure like the young Boba Fett last year. Perhaps a young version of Luke would have worked even if wasn’t exactly in the Star Wars canon. What was great though is that the Festive theme continued to more than the main Darth Vader figure, even if the modifications were fairly simple to make.

Perhaps the most disappointing thing about the 2014 calendar is the amount of the non ship builds. These weapon racks, mounted guns etc have gone from 3 in 2013 to 6 in the 2014 calendar. While some of these builds are nice like the fire place or the mini moisture vaporator, the rest just seem very samey and uninteresting.

Overall though, the Advent Calendar does just what it says on the box. The small builds or figures for every day are fun and will hopefully keep everybody happy until those larger sets arrive amongst the Christmas presents!