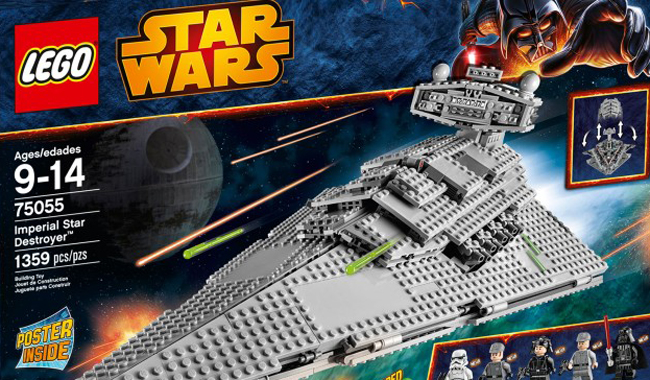 The Imperial Star Destroyer is the largest set of the latest release of Star Wars Lego. These huge wedge shaped star ships are introduced right from the start of New Hope and are certainly up there as one of the most memorable vehicles in the Star Wars universe. While Lego has had several attempts at these ships there hasn’t been a proper one released since the midi-sized star destroyer (8099) in 2010 and the last full sized ship in 2006 (6211). The 2006 ship suffered badly from being flimsy and therefore very easy to break but for the 2014 model they have really improved on this and the ship now feels like a tank!

The detail on the ship has also improved. The front of the bridge was very plain on the older versions, whereas in the new version they have added a lot of detail with seemingly random brick formations. The guns on the sides also look better now and turn together operated by a lever at the back.

In theory at least all the 6 real minifigures in the set are new designs. The stormtroopers are the same printing as in the Mos Eisley Sandtrooper, just without all the dirt printing and the shoulder guard as you would expect on a space ship.

Darth Vader gets leg printing for the first time with subtle dark gray lines representing his long robes. The head colour has also changed from gray to tan flesh colour. This might be more accurate than the old versions, but does leave an out of place flesh coloured neck line on the figure when looked at from certain angles. The printing on Vader looks great though and certainly adds to this already superb minifigure.

The imperial officer this time is an unnamed figure with the most distinguishing feature being his great ‘70s sideburns. The hats on both the officer and the imperial crew member seem new and again the printing has been improved a little including some leg printing on the crew member. The same goes for the imperial navy trooper which last appeared in the 2012 Tie Fighter set (9492). The helmet is the same as before whilst the printing of his completely black uniform has changed.

Finally we have the Mouse Droid which is the cute little car/box that directs the troopers inside the ships and most memorably the Death Star in the films. This is really just a fun little brick built accessory rather than a real figure.

So while all the figures are advertised as new and exclusive to this set, they are not massively different from previous versions and certainly not enough for anyone but collectors to bother with.

As you might expect, the Star Destroyer is a big ship and the build is nice and long as well. It is also not as repetitive as the AT-AT with its legs although obviously the ship being symmetric there is some repetition.

The build starts by establishing the flat base, including the carry handle and then adding the mainly technic based outer edges and the engines. The base section includes all the inner play areas of the set which are pretty plain with only a few chairs and screens as well as quite a few stickers for wall decoration. The best part here is the mini sized ‘hologram’ Emperor which is very nicely made. The tower/bridge section is built next and is probably the most fun section to build with some nice techniques used to create the final look.

The two sides are then built in two parts of lower and upper sections each. As expected, these are mainly built from flat gray plates but instead of being separate these are effectively joined together, creating a hinge on the outer edge. This attachment method is very clever and certainly creates a strong attachment by finally ‘bolting’ the sides at the outer edges with technic pins. This method of building is not only more sturdy, but also much easier to build than the method used on the Super Star Destroyer which I found particularly difficult to get right.

The final section is the central top section which is meant to be removable so that the play areas inside are accessible. This section is built on two nearly identical halves which are again attached as a locked hinge type arrangement creating the angle at the top of the ship. What feels initially strange is that the top section is not attached to the ship by anything in particular. What keeps it in place is the bridge section and the carry handle creating enough hold that it is never really in danger of falling off. Yet, the piece does feel a bit loose and leaves clear holes to the interior in the sides, which seems odd at first but really does not look or feel as bad as it sounds.

The Imperial Star Destroyer is an impressive set as you would expect. It looks great and can be had at a fairly reasonable price considering its size. It looks good for displaying and the flat base, while losing some of the accuracy, does mean it is easy to display without requiring a stand.

The set is not a display set though. The play features are obvious with flick fire missiles and the carry handle which lifts up from its hiding place in the middle section allowing manoeuvrability. The ship is definitely heavy to move, but a ship this size does not need to be moved at speed anyway and the handle just allows a safe part to pick up the set without the risk of pulling anything off.

As mentioned above, the middle section also lifts off easily allowing access to the interior giving some play area. While the interior is very plain, I liked the way there is enough space inside to leave the figures standing while the top is on. This was one of my bugbears on the Super Star Destroyer, in that there wasn’t even space for all the minifigures to stand within the ship.

Finally the fact that Lego have managed to finally make the Star Destroyer design sturdy enough for play is to be commended. While no doubt it will still break if you drop it from a height, it never feels like you have to be particularly careful with it either which is surprising for a set of this size.

The minifigures are unique as far as collectors are concerned and show improvements over older versions, but there is nothing truly new here. However, the figure selection does allow a good mixed crew for the ship which therefore completes the play features perfectly.

While this is the top of the range Star Wars set, it is not in the price league of the Ultimate Collectors’ sets and somehow the price seems pretty reasonable for the ship you get. It has been a while since we have seen a new Star Destroyer and this one certainly ticks all the boxes for a great Lego set.