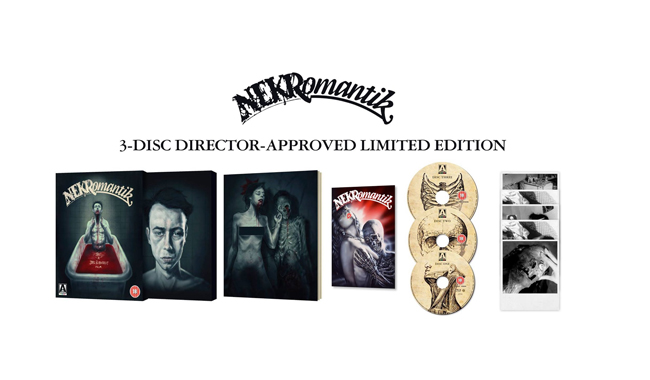 Forget the Italian Cannibal Ferox films, you would be hard pressed to find a film sicker than this 1987 West German film. Believe me when I say it is for a select few only. If sensual necrophilia with a rotten stinking corpse, brutal deaths, violent rape, castrations, a live killing and skinning of a rabbit or the digging out of pigs eyes and intestines doesn’t do it for you then give it a miss. The whole package by Arrow fulfils their aim of not just releasing those controversial and cult films but providing lots of extras and contextual material.

Nekromantik was made on a low budget and looks something akin to a student project as it was shot on Super 8. Made by young director Jorg Buttgereit the film crossed the bounds with a number of taboos. It opens with a couple lost in the rain when their car comes off the road. The next morning we see the carnage with the dead woman having been thrown from the car and cut in two and the man trapped in the wreckage with an object having penetrated his eye. Shortly after a van pulls up, Joe’s Cleaning Services who deal with clearing the roads following accidents and in particular scooping up the bodies. One of the operatives, Rob is also secretly a necrophile and steals body parts and innards which he takes him with him and places into jars. He lives with Betty, his girlfriend who enjoys bathing in blood and shares his predilection as a necrophile. One day a rotting corpse is uncovered and Rob takes it home when Betty proceeds to erotically and sensually make love to it in one of the two very controversial scenes in the film (more about the other later) adding a steel phallus to the corpse for her pleasure. It soon becomes apparent that Betty fallen in love with the corpse and one day while she is reading to the rotting cadaver Rob comes home and tells her he has been sacked. This ends their relationship and Rob returns home to find that Betty has absconded with the corpse. Rob’s life then spirals even further out of control.

Recently The Sun newspaper reported on the Arrow release of the film that the sick banned film was due for a release. The truth is that the film was never released in the UK and was therefore never banned. There was never any attempt to submit the film to the BBFC as in all probability it would never have passed. Many countries have banned it however citing that necrophilia was banned in said country. Does that mean many other films should be released as murder is also banned? In one of the myriad of documentaries accompanying the film many of those who saw the film first back in 1988/89 speak about how they got hold of an illegal imported copy or recall the late night screening of the film at the wonderful long since gone Scala cinema. As expected lots of people walked out in disgust, as much for the slaughtered rabbit as the scenes of necrophilia. The film, unlike many of the Italian horror films made at the time and earlier such as the Cannibal Ferox films does have pretensions at art with many bizarre scenes such as the prolonged sequence with Rob watching a documentary about spiders on TV, his viewing of a B serial killer film at a cinema after Betty has left or the aforementioned slaughtering of a real rabbit and its subsequent skinning. This caused controversy as much as anything else (the final shot of the films show this scene played backwards).

There are lots of other contextual material accompanying the disc including home footage of the Berlin premiere in January 1988 (before the film was banned), talks by representatives from Arrow and those who saw the film about why the film is of interest. Other extras include trailers (equally cheap and sick looking) by Buttgereit including the sequel, Nekromantik 2 (1991) among others and his first short film (also shot on Super 8), Hot Love. As Arrow admit on the disc that the film is not expected to make any big sales, they are however keeping an eye on the fallout of the film in the press and media. So far this has produced very little – is this due to the age of the film or that we are no longer shocked nor believe that the self-castration sequence is real? Or have we become inured to such visceral and taboo subjects? Conversely we live in an age when films like this are ever made. During the introduction Buttgereit himself cannot understand why anyone would want to see such a bad film. The release of Nekromantik therefore, as bad as the film is, perfectly serves Arrows function in re-addressing those forgotten cult films and make another interesting addition to their catalogue.