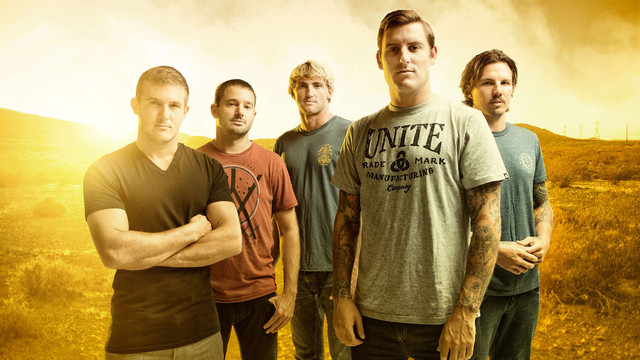 The multitudes of metalcore fans outside Manchester Academy aren’t put off in the slightest by the pouring rain. It’s been two years since Parkway Drive last toured, off the release of their last album ‘Atlas’ and the excitement in the air is almost tangible.

Openers Carnifex play to a venue as it fills; the Californian deathcore crew are underwhelming – it doesn’t seem surprising, somehow, that five records into their career, post-hiatus, the band still don’t seem to have the passionate following amassed by the other bands on the bill. Only ‘Dragged Into The Grave’ seems to elicit enthusiasm from the crowd, but the band’s set is too short to allow them to capitalise on it.

In contrast, Northlane are an incendiary act – new vocalist Marcus Bridge has some pretty big shoes to fill following the departure of Adrian Fitipaldes, and it’s clear that he’s intent on taking Northlane’s back catalogue and making it his own. Songs like ‘Dream Awake’ and ‘Worldeater’ sound just as good with Marcus and his ferocious howl at the helm, and the band end on a triumphant rendition of ‘Quantum Flux’.

German metallers Heaven Shall Burn are great at getting the crowd involved. Their 11-song set flashes by in a daze of circle pits and fist-pumping. One of those rare bands who sound better live than on record, they don’t let anything stop them from laying the venue to waste – songs like ‘Voice for the Voiceless’ and a cover of Edge of Sanity’s ‘Black Tears’ go down well and as the last notes of ‘Like Gods Amongst Mortals’ ring out, it seems as though they’ve won this city over.

Parkway Drive are metalcore legends for a reason. No one crowd member could stay still during their set; it’s impossible. Putting aside the pyrotechnics, the ticker tape explosions during their first song ‘Wild Eyes’, or their unwavering charm as a bunch of extremely likeable dudes, the band have complete mastery over a crowd. Their set is a blur of multiple pits and walls of death; everybody in the crowd jumping in unison to ‘Deliver Me’, every word or riff sung back at them, and a feeling of unity in the sweaty room that few bands can inspire. The heavyweights roar through songs like ‘Sleepwalker’ and ‘Karma’, ‘Dark Days’ and even revisit older releases from their back catalogue, playing old-time favourites like ‘Idols and Anchors’ and ‘Mutiny’. As the band finish their encore to ‘Carrion’, I’m deafened by everyone around me, covered in bruises and know I’ll be aching for days to come. But it’s Parkway Drive, and it’s always worth it.