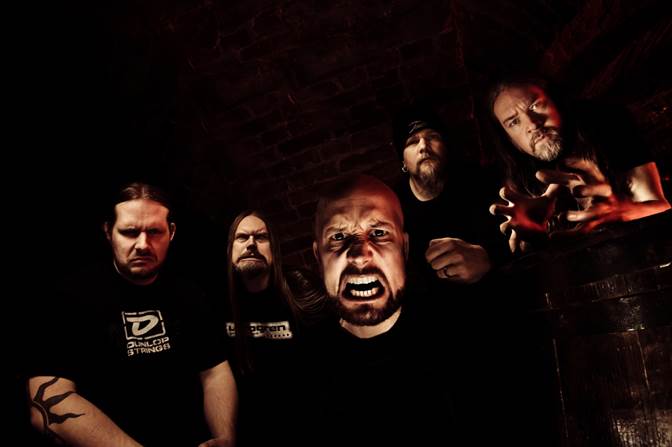 Hipster-central Camden Town is awash with metalheads of all ages and descriptions – the bars up and down the road from London’s legendary Roundhouse theatre are full of Meshuggah fans. They’ve travelled the length of the country, and some of them come from as far away as France, Germany and even Spain to see the extreme/prog/djent heavyweights on their 25th anniversary tour.

Openers Semantik Punk are some kind of strange – none of their lyrics make any sense, and songs like ‘jest to A’ and ‘abcdefghijklmnopqrstuvwxyz’ both entertain and bewilder the crowd in equal measure. The Polish experimental crew are a baffling act, but most definitely worth a listen; just don’t expect to make sense of anything you hear.

Following on, Car Bomb are (just a little bit) more straightforward. Their brutal progressive metal has the room moving, and songs of their sophomore record ‘w^w^^w^w’ (or ‘the waveform record’, as it has come to be known), such as ‘Finish It’ are aggressive and discordant, with choppy riffs and enough descending pick scrapes and artificial harmonics on songs like ‘Gum Under The Table’, to keep the audience spellbound.

It’s just after 9pm when Meshuggah take to the stage for a blisteringly beautiful 15-song set, spanning almost two hours. As soon as vocalist Jens Kidman bangs his head to the opening, chugging riffs of ‘Future Breed Machine’, the whole venue is enthralled, and chaos ensues. Pits are a constant feature of the setlist, there’s more crowd-surfing during their set then during the average 3-day weekend festival, and every member of the audience is hypnotised by the intricate, unique grooves that none but the Swedish prog behemoths can pull off with such aplomb.

It’s an honour to see Meshuggah live, and on such a tour, when the band have dusted off old material that rarely sees the light of day, too – ‘Cadaverous Mastication’ and ‘Greed’ are songs that the band will most likely never play live again. After 25 years of touring and writing material that rightly secures them a place as virtuoso musicians, the band are like nothing and no-one. Their set is utter perfection of the most experimental kind, and 500-odd words of waxing lyrical still wouldn’t be enough to convey the sense of awe, wonder and sheer admiration experienced at a Meshuggah gig.

The Swedish heavyweights dipped into their extensive back catalogue for the show; favourites like ‘Bleed’, ‘Demiurge’ and ‘obZen’ sit alongside older material, and the light show, musical interludes and exuberantly artistic stage setup adds to the sumptuous show put on by the band. Fans old and new, foreign and British, from teens to those on the second level in their fifties, thoughtfully looking upon the dazzling spectacle onstage – it seems as though all fans have come together for a once-in-a-lifetime experience, and there is a sense of unity, of community, of a scene within a scene, in that room.

When the encore is over, and the last doom-laden riffs of ‘In-Death – Is Death’ rings out over the heads of the crowd, the lights go up, the spell is broken, and the best gig I have ever been to comes to an end.