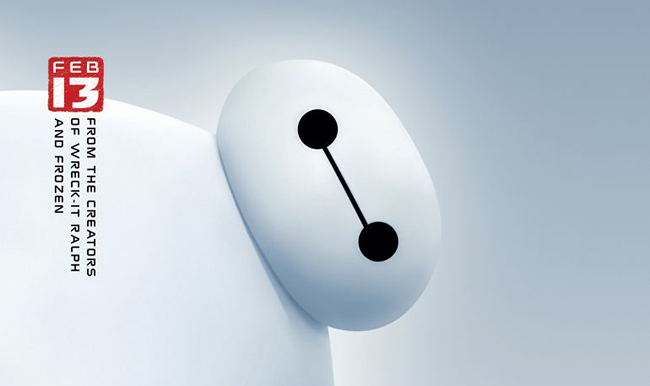 Hero lives in San Fransokyo (Yup. It literally is a mash up of those two cities and cultures). As a child genius and inventor – he seems to have found himself on kind of the wrong path – playing illegal betting games in back alleys with other nerdy looking gamers. It’s up to his older brother, Tadashi, to set him straight – which he does by turning Hero’s attention to invention.

Hero forms an idea using microbots and at a science expo his idea goes down well. But disaster strikes in the form of a fire and in the ensuing chaos Tadashi is killed in an explosion.

In the wake of this Hero is left wallowing in sorrow until he happens upon Baymax Tadashi’s first aid assistant robot. The two spark up a friendship, but also a mission to go after the person responsible for the death of Tadashi and they are aided by Tadashi’s colleagues and in the process become the 6 of the title.

Big hero 6 marks Disney’s 54th animated classic. It may look and feel like Pixar, but it is under the Disney along banner. And what a visual feast it is too. Disney have outdone themselves when it comes to imagining the cityscape. Baymax is already a worldwide loved character – his simplistic design perhaps influenced by the sleek look of Eve from Wall-E (and also from just about anything you can find in an Apple store these days).

The big head/giant eye’d look that Disney (and Pixar more to the point) have been using on human characters since way back in Toy Story is starting to get a little beyond creepy looking and it would be nice if a new design was incorporated into fresh material.

Big Hero 6 is one aimed at kids that big kids won’t get too offended by – but it isn’t a universal barrier breaker like the Toy Story movies have been. There is a lot of daft ideas here and forced themes that more mature audiences would rather skip. The story itself also takes the better part of half an hour to really get going – in the end you get an animated feature that is pushing close to two hours – which simply doesn’t have the dramatic content to justify the running time.

But as big screen spectacle goes for animated films go then this one is easy to get on with. And technically it’s another Marvel as it has been adapted from one of their comics.