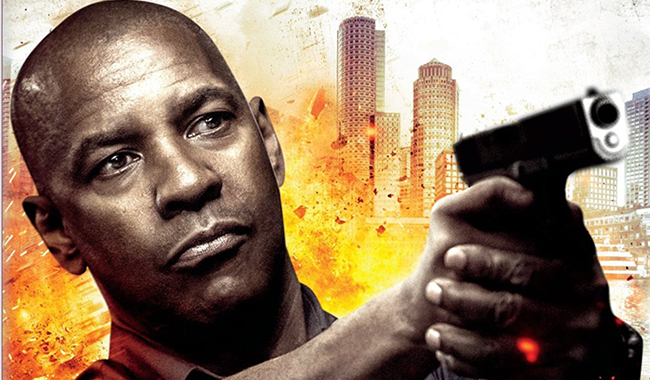 It’s been 14 years since the collaboration between actor Denzel Washington and director Antoine Fuqua resulted in the tour de force action flick that is ‘Training Day’. Whilst placing Fuqua on the map – not to mention collecting a well-deserved Oscar for Washington – he hasn’t since been able to match that 2001 game changer with the lacklustre Shooter (2007) and the downright awful ‘Olympus Has Fallen’ (2013) to name a couple. So can a new action flick based on a 1985 – 89 television series, adapted and penned by Richard Wenk of ‘The Expendables 2’ fame and reuniting Washington and Fuqua called ‘The Equalizer’ save the day? Let’s find out!

Plot-wise, you’ve seen it a thousand times before. Washington plays Robert McCall, a former CIA bad ass with some kind of tragedy and mystery in his past. Now retired he leads a simple life in a simple job and keeps himself to himself until he befriends a Russian escort – not what you think – called Alina (Chloe Grace Moretz – all grown up). He finds out that she’s suffering abuse at the hands of a vicious Russian trafficking gang and decides to go all ‘Liam Neeson’ on them.

Granted, not the most original plot under the sun but I have to say even though every prediction I made about what was going to happen, who was going to die, who was going to be kidnapped etc there are some elements at play here that make for a more enjoyable ride than your average ‘shoot em’ up’. An example of which is McCall’s proverbial ‘set of skills’ – that are rather ambiguously referred to in the official synopsis and as a nod to the original television series. We’re shown early on that McCall has a certain attention to detail; an OCD if you will to the things that he does in his day to day life. However, in combat this allows him a glimpse of the situation and surroundings before striking with lethal accuracy. While that sounds suspiciously similar to the tactics employed by Guy Ritchie’s titular hero in Sherlock Homes (2009), the payoff is watching McCall take out bad guys with improvised weaponry. By the latter portion of the film it’s almost ridiculous with McCall ‘MacGyver-ing’ together all manner of booby traps to slice, dice and explode a seeming never ending supply of evil henchmen. On that note I also enjoyed the main antagonist, the inappropriately named ‘Teddy’ played by Marton Csokas and his establishing ‘I am a bad man’ scenes are among the film’s most brutal – just, y’know, in case a Russian gangster who operates in sex trafficking and who is covered in satanic tattoos isn’t enough of a giveaway. However, my favourite scenes of the film are when Teddy and McCall are face to face standing off with nothing but well written dialogue between them. One such scene set over a dinner table appears to be a wink to a similar iconic scene from ‘Heat’ (1995).

On the more negative front the film’s pace is almost a victim of its own ‘tension building’ which is very effective but drags a little when it’s so obvious what’s going to happen. Additionally, as with all action films you have to suspend your disbelief and preferably not ask any logical questions such as “how does McCall have that guys phone number?”, “how did McCall have enough time to set up all of those traps? And how did nobody see him” and “how did McCall know that those dudes were going to be there at that time and place?”

With all said, The Equalizer doesn’t quite match Training Day but it is certainly a welcome return to form for Fuqua. We also get Washington back in his most memorable role since Man on Fire (2004) so I’d call it a win win.