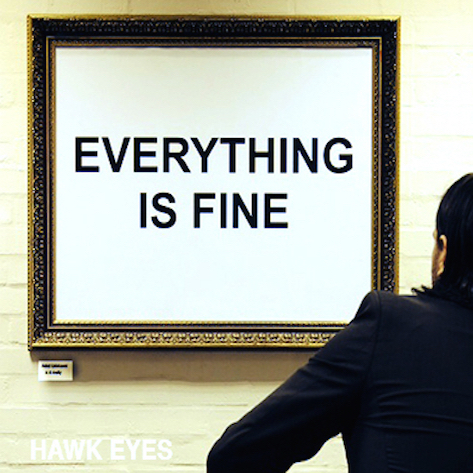 Hawk Eyes – Everything Is Fine

Having had the pleasure of catching Leeds noise-makers Hawk Eyes perform live on several occasions, and getting my balls blown clean off each time, I was chomping at the bit to get my ears around new album ‘Everything Is Fine,’ the follow up to 2012’s ‘Ideas.’

Lucky me, cos’ here we have a record rich in so much of what makes heavy rock so brilliant, and no doubt only 9 places left on my ‘top 10 albums of 2015 feature’ for next year. Bugger. Building on their everything-and-the-kitchen-sink approach to riff-making, tracks like ‘Permission’ groove along like a slightly less stoned Kyuss, with some awesome hardcore riffage and breakdowns a la The Bronx and Defeater thrown in between the impressive vocals of vocalist / guitarist Paul Astick.

Single ‘Die Trying’ chugs along like In / Casino / Out-era At The Drive In, throwing in off-beats galore and more of the by-now instinctive nod of head / tap of foot / curl of lip that cements my approval and immediate satisfaction of this killer set of tracks. Opener ‘The Trap’ is an awesome way to kick things off, pairing QOTSA riffery with the occasional math-y edge of Oceansize and a breakdown that I can’t wait to enjoy live.

‘Terribly Quelled’ is a full on punk rock homage to Black Sabbath that again has me thinking Bronx, even Alice In Chains at times. This is what makes me enjoy this band so much – I can hear loads of my own favourite bands and records going in to the pot, but it’s put together in a way which makes it a sound all of its own as well, and I can’t think of another band right now to compare Hawk Eyes to. Kudos producer Andy Hawkins and the band for making something that will inevitably set them apart in 2015 and see them continue their impressive rise.

Title track ‘Everything Is Fine’ is a second half favourite, and gives all four players space to shine in the breakdown/ending, reminding us again of their live appeal.

For me, the UK rock scene is in pretty decent shape at the moment, with the likes of Marmozets, Turbowolf, Gnarwolves, Royal Blood all – its fair to say – smashing it, there’s no good reason why Hawk Eyes won’t take their rightful place on the tip of the wider publics collective lips as well.

Everything Is Fine? More like ‘Everything Is Fucking Excellent.’ Go get it when it drops in February, and make sure you catch them on tour – you probably want to preorder for that by the way.