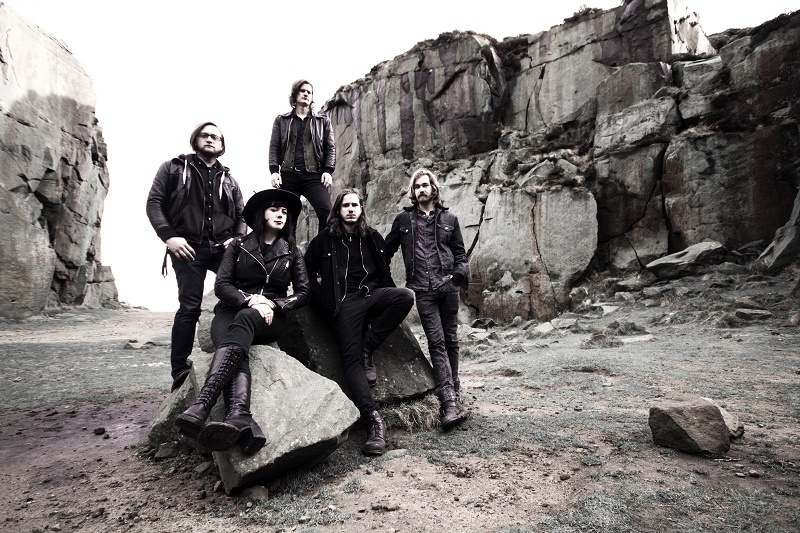 We caught up with Black Moth front woman (and First Lady of Riffage) the marvelous Harriet Bevan recently to find out more about their upcoming tour dates with Amplifier, what their next single looks like, things they like about Leeds, her opinions on Kanye West and a whole load more – read on…

You’re off on tour in April with Amplifier – what larks. How are preparations going?

Very well thank you- though April feels like a long way away. Lots to do before then what with shooting a video and putting out a single (‘Looner’) just before we head off on tour. We also did some pretty extensive touring in Europe at the end of last year so our set is feeling pretty tight already.

Leeds is boss isn’t it. What’s your favourite place to visit there and why?

Oh it sure is. Personally, its proximity to the Yorkshire moors is the highlight for me since I moved to London. Yep, the Moth boys are keeping it real up in Leeds but I absconded to London a couple of years ago for study. Now when I go back, I head straight for the countryside, where the air is so cool and clean compared to grubby Hackney I feel like I can taste it. As for Leeds itself, my favourite place to hang out has always been the Brudenell Social Club- such a special venue we are really lucky to have. I also love our little rehearsal den we share with fellow Leeds bands Pulled Apart By Horses, Kings, Department M, Monster Killed by Laser and These Monsters.

Your new album ‘Condemned to Hope’ was received extraordinarily well – is it always good to read great reviews, or could you care less what the critics say?

It’s like horoscopes really, you always believe them when they’re saying all the good things but call it a pill of trash when they “don’t understand you.” HA! Actually I feel like we’ve been very lucky though. If there has been a poor review, I haven’t seen it. It’s always a joy to read when someone really “gets” what you’re doing and appreciates your vision.

We are very much pro-feminism here at Glasswerk and its great to see amazing women in great bands like Rolo Tomassi, Black Moth and Marmozets doing so well – how can we help to encourage more women into the world of badass rock music?

I really don’t know why lasses are still fairly few and far between in rock! It mystifies me. But then again sometimes I look around me when I’m sitting around freezing my ass off, swilling shitty rider beer in some dank, musty, smoky, sticky backstage area for the 11th groundhog day of a long tour and think: well it’s fucking obvious really. Most women have more sense! But they’d be missing something. It’s magic and empowering and I implore them to try it.

What’s your stance on Kanye? (topical)

Well he’s not boring is he?! I’m not really knowledgeable enough about him to make a fair judgement. I guess I think of him as worlds apart from me, though I do sometimes watch him in wonder. I see one of his videos such as “Black Skinhead” or “Bound 2” and find myself inexplicably seduced by them. I don’t take it too seriously… I like my pop stars to be genuine weirdos, flying the freak flag without even really knowing it (or faking it like Gaga, who I don’t think is crazy at all, she’s far too savvy) and I think Kanye is part of that colourful club of megalomaniacs that almost effortlessly carve their place in pop history.

Things ain’t easy for musicians these days. What are some of the tribulations you personally face reconciling your musical career with attempting to live a real life?

It sure ain’t. I’ve had to quit some very nice jobs when we’ve been offered irresistible tours etc and that can be very destabilising. The amount of time, passion and energy musicians commit to their work is incredible and the pleasure they bring to their listeners immeasurable, yet the practice barely sustainable. But it’s important to remember that creativity is its own reward. And I don’t know where I’d be without that opportunity to wail onstage- that demon outlet! I think a lot of musicians would admit the same. Doing what we do isn’t really an option, it’s part of who we are.

You get into a hypothetical bareknuckle fight with one other Black Moth band member – who is it and why?

The moths are lovely young men and 100% like brothers to me. As such, I know they’ve got my back and would beat several shades of shit out of anyone who hurt me. That’s nice. But it also means they really know how to push my buttons and rile me until I’m spitting blood if they want to. I wouldn’t like to single one out, but not-so-hypothetical bareknuckle fights are always an option.

What’s been the highlight of Black Moth so far for you?

Well our career highlight was probably something like supporting Uncle Acid and the Deadbeats on tour in Europe… or that time we played to a packed tent of crazy kids at Download. But for me, I will never forget the girl who begged us to play “Red Ink” in Germany because it got her through the death of her boyfriend. She said they both loved the song. That’s special. Unfortunately we hadn’t rehearsed the track for that tour but I’m determined to nail it before we go back just in case she turns up again.

Iron Maiden’s manager recently launched a press release about ticket touts calling on fans of the band to write to their MPs in support of stronger regulations for the secondary ticketing industry as part of the Consumer Rights Bill. Where do the Moth stand?

Is this the think Toni Iommi was fighting for too? I totally back it! It’s a no brainer, surely! I’d like the music industry to call an end to all crooks getting rich from the passion and good nature of fans and musicians… oh wait…

If you had to choose one guitar riff to transform into for the rest of eternity, which would it be?

Black Sabbath – A National Acrobat. It just does things to me. Dem harmonies. Woof.