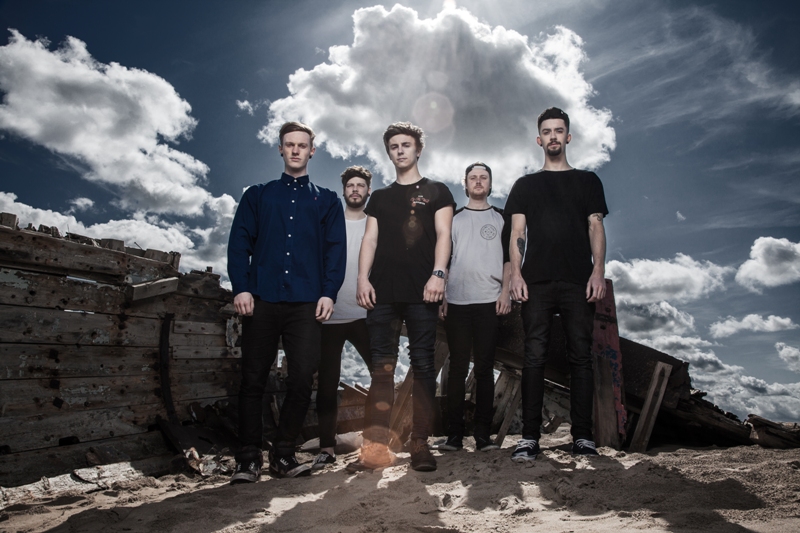 We sent Mercedes Brown down to speak to Oceans Ate Alaska recently at the London leg of their dates with Chelsea Grin and Veil Of Maya. We managed to grab some time with a very sweaty, post-show Chris Turner and obviously, there was no better place to go in Camden than North London’s landmark of heavy metal, The World’s End…

How do you think tonight went?
It was okay, yeah. Because I’ve got my in-ear set up for monitoring it varies from show-to-show and tonight my in-ear sound was very difficult. I struggled to hear anything! Other than that, the crowd seemed to be stoked; everyone else was stoked, so yeah!

So you’re half way through your Euro tour?
Yep

Your Euro debut, even. How are you finding that?
It’s awesome! Europe is just wicked. In the UK they just give you buy out money, so they’ll give you like a fiver or a tenner for dinner. In Europe they give you lunch and they give you dinner. They give you snacks to take away… and even snacks for breakfast. They like look after you so well and all the crowds are so much more ridiculous, like, so much more ridiculous. Plus, it’s even cooler because we’ve never played these places, like ever. We’ve got these kids every night showing up in our shirts and singing all of our words and it’s just like, it’s actually quite breathtaking you know? You don’t really expect that!

Well you’ve only been a band for four years and only put out 2 EPs before this album…
Yeah! It’s like just off an EP, to go round Europe and go round all these random-ass places and have kids stoked off their mind is so sick. ‘Vultures and Sharks’, one of our singles, only came out like a week ago and there’s been people singing it the whole way through every night! It so sick to know that people are that stoked and on the ball.

Because this has been your first Euro tour has this been the longest tour?
It has, yeah!

What’s it like being away from home for that long?
Ummm, it’s different. I’m missing everyone. Missing all my friends, missing my family, missing my girlfriend but they all came up to Birmingham which was only the other night so I’ve had a little top up but I’m okay.

But I guess it’s cool to see the World as well.
Oh yeah, for real!

So you’ve toured alongside some pretty cool bands. Who would you like to tour with next? They don’t have to be in the same genre as most of the tours you’ve done so far have been with similar bands…
I’d love to tour with Issues. I think they’re sick. I really love the drumming in all of their tracks and I think they’ve got a great vibe about them. I think they’d have crazy shows so I’m going to go with Issues straight out.

Totally fair enough! Moving on to the record… Your debut streamed today on Rocksound, have you managed to see the reactions from it?
Honestly, I haven’t even checked it yet.

Really?
I’ve been running around London doing interviews so I haven’t even had the chance to be online. So I can’t answer that. I’m sorry…

Don’t worry about it! So how do you guys feel about the record? Has it been a massive progression from the EPs?
Yeah, well the thing is a lot of people expect bands to do the same thing they always do, or what the band is known for doing. We’ve had a member change. We’ve all grown up. We’ve gone through life changes. We’ve got different influences. The bands that everyone listens to changes – you never listen to the same bands. So naturally because it’s been two years since the EP we’re going to be different.

Would you say that your line-up now is definitive?
Oh yeah. We’re not changing now. For sure.

Did the changes affect your creative process, though?
Yeah it did. The way we compose is that everyone comes over to my place and we trial and error everything. Like, everything you could imagine. We focus on every last detail and we make sure that everyone’s happy and then we move onto the next section and that’s why we take so long to write. So going into that level of detail with different people of course has a difference in the result.

Would you say that going on from 2 EPs to a debut record, with Fearless Records, was a massive jump?
Oh yeah. Just signing to Fearless is just ridiculous. They are like the label. I’m sure you’re aware that Fearless are just the one. They don’t normally pick up bands for their first album; they’ll pick up bands that already have a few releases. So, to get signed to Fearless to release our first ever album is literally a dream come true…without sounding super lame.

As well, looking at their roster you band is slightly different. I mean you’ve got djent influences and all of that, so I’d say you’re a little bit heavier than the others?
Yeah. I think that’s one of the other reasons why they picked us up. I’m not certain…We’re in contact with them fairly regularly. We have calls most evenings. They’ve said many times that were the heaviest band on the label and they like pushing that – on all their posters they’ve got “So if you like some heavy stuff we’ve got some OAA” so I think they’ve almost done that as a marketing tactic.

So was this the album that was produced by Josh Wickman?
Yes.

So with Fearless, why did you go for him? He’s not really an obvious choice?
Well he’s not the most well-known producer in the world but it doesn’t mean he’s not incredible. We literally sat down, I say sat down but that makes it sound like we took hours to decide… Over weeks and weeks we were regularly getting together listening to all our favourite bands saying “What do you think of this production?” and we just couldn’t agree. They’d be like “These guitar tones sound amazing, all his guitar tones sound amazing” and I would just be like “Yeah, but his drums sound like shit”. We could never settle. Then we heard the Within The Ruins last record, which Josh did, and our jaws just dropped. He actually hit the mark for all of us. So even though he was in Michigan, it was like if we want this record to turn out the way we want we’ve got to go to Michigan.

Well it must have been for the experience as well?
Yeah, of course it is! So much stupid shit happened on that trip.

What like?
Like walking over frozen lakes and it starting to crack. We did all kinds of shit. There were tornados the day we got there and all the power was cut and it was -25 degrees. We were in a wood cabin! So for two days we had no heaters, no nothing and we were jetlagged!

Ha! At least it’s a story to tell…
Oh yeah, there’s stories from every day. Like, it was ridiculous. So yeah, even if this record doesn’t do well…

It’s all a part of the learning curve.
Yeah, exactly! It means a lot to all of us whether people pick it up or not.

This has been your third time playing the London Underworld, when do you see yourself taking the next step up?
Well as soon as we’re ready. I don’t really think you can put a timer on that. It’s based on the audience’s response to you. If the new album does alright, we jump up to a massive venue and its half empty that’s going to suck. But if it blows up and we can fill the room and it’ll be a good party then yeah, it’d be great. So I guess it’s just in due course. Obviously, we want to succeed but to me success is a kid coming up to me at a show and saying “You’ve inspired me”. I don’t care if we don’t sell a ton and we don’t sell-out shows, whatever. As long as the fans can take something from this record – that to me is success. If it happens, awesome.

This is a similar question in a way, but you’ve put out a record with Fearless records in just 4 years of being a band as well which is pretty awesome, what do you see coming next for you guys?
Well if it goes well with this record Fearless are definitely got us for our second. There are already option periods in the contract so if all goes well we should be with them for five albums…which is mad.

That’s something you should know about me, I love awkward situations. There’s this guy on Youtube who does awkward things for the sake of it and he’s probably my idol.

You must be loving this interview then.
No! Though, I’m really sorry if I make something awkward and then you hate it! And I have completely forgotten your question.

You were saying that Fearless have you for five albums…
Ah yeah! Well if all goes well we’ll stay with them and start writing the next record.

Generalising, but the deathcore scene is all very similar so it does set you guys apart.
That’s the thing! It just didn’t work for us… We literally couldn’t do it. We had ten seconds of music that we didn’t mind just because we were writing for people. As soon as we stopped writing for people and started writing for ourselves we were on a roll. We were stoked! We loved it all. If you like what you’re doing, chances are other people will as well. If you’re stoked, everyone else will see that. No we’re not going to go commercial. We do what we do because it’s our creative outlet.

We’re running out of time sadly, just quickly are you guys playing any festivals this year or have any other tours coming up?
We’re on a few already. We’re at Hit The Deck. I’m actually putting us forward for a few US festivals.

You’ve never played the US before have you?
We haven’t no, so that would be super sick.

Well, with Fearless being based in the US surely it would make sense as well?
Oh yeah. I mean there’s so much talk. We were actually booked on a US tour but we decided to drop out of it because it wasn’t going to be great financially. There are opportunities there and there will be a lot more. It’s all about finding the right time for us! We’d rather do it right. We will do it in due course and it’ll be sick.