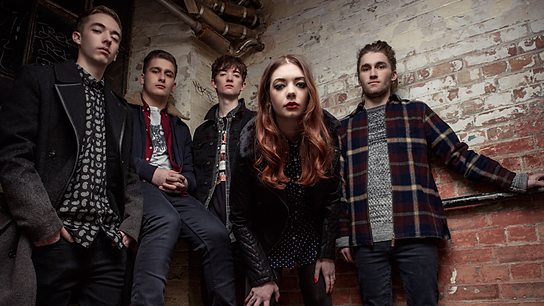 Walking down to the picturesque Quayside, there is a buzz of excitement. Marmozets are hitting up Riverside in Newcastle and although there are tickets available on the door, there can’t be many, because the queue is already substantial.

First on are experimental trio Thought Forms. Their grungy, downtuned grooves are impressive; the band members don’t speak much on stage, but with doom-laden tracks like ‘Silver Kiss’, the audience is more than okay with them letting their music speak for itself. The partnership between guitarists Charlie Romijn and Deej Dhariwal is electric – watching them play and layer tracks with pedals is a rare treat. Although they seem to divide the audience (the marmite of support acts?) I thoroughly enjoyed their set. These guys are destined for more, and I can only hope they’ll play in Newcastle again.

Main support Steak Number Eight are another band that are difficult to pigeonhole and just as divisive as the previous band to take the stage. Equally passionate and furious, the Belgian atmospheric sludge quartet are sonically astounding. Vocalist/Guitarist Brent Vanneste’s screams are chilling; the band’s set is tight, and songs like ‘Push/Pull’ have the crowd moving.

Marmozets are headlining in their own right for the first time, and it really is something to see the Bingley quintet finally come into their own. Simply put, Becca MacIntyre is an absolutely brilliant frontwoman. From the second she steps onto the stage, she has the crowd eating out of the palm of her hand. The band tears through a set full of favourites, from ‘Particle’ to ‘Move, Shake, Hide’; a pit opens up, and girls and guys alike are moving and shaking for sure.

The crowd screams back every word to ‘Captivate You’, taking aback guitarist Sam Macintyre; he’s now decided that Geordie crowds know what it’s all about. As the last song ‘Why Do You Hate Me?’ fades out, it’s abundantly clear that the people of Newcastle are absolutely in love with Marmozets.