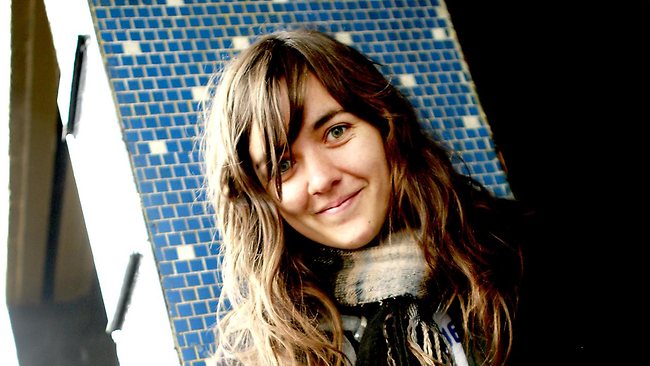 Take a charming face, slight distortion on the sound, the ability to pen a good lyric, wrap them all around a pop sensibility and what do you get? Well, it’s a good start to imagining Courtney Barnett.

Barnett is latest in a steady flow of Antipodean artists making waves in Europe and here in the UK, and is, quite frankly, tailor made for a crowd like the one which attended her latest sold out UK show. Bearing in mind this event took place in Glasgow’s Art School, I mean that in the nicest possible way.

She recently went to the top of the Alternative Billboard charts in the U.S with her acclaimed debut album ‘Sometimes I Sit and Think, Sometimes I Just Sit’, the follow-up to her first collection of recordings ‘The Double EP: A Sea of Split Peas’. Unsurprisingly, the set list would draw heavily from the former, a tremendous collection of woozy melancholy (Kim’s Caravan), Moldy Peaches-esque slacker rock (Dead Fox) and wistful folk which draws from the best bits of bands like Camera Obscura and Belle and Sebastian (Depreston).

The music is versatile and gives nods to much of what the gig’s crowd would have already been well versed in – what really makes Barnett worthy of your attention is the words. ‘Pedestrian at Best’ doesn’t see her singing many of the lines; it’s more of a poetry reading set to music. You can imagine her standing on a soap box with a megaphone addressing a hypnotized crowd. “Under worked and oversexed I must express my disinterest, the rats are back inside my head what would Freud have said?” she pleads before giving a few wise words which seem designed precisely for the music press – “Put me on a pedestal and I’ll only disappoint you.”

Don’t get me wrong, there is the odd clunky line in there; “Watching all the movies/ drinking all the smoothies..” she sings on ‘An Illustration of Loneliness (Sleepless in New York) before making amends with the dreamy verging on the drowsy chorus of ‘I’m thinking of you too..’ on repeat. Within the audience, gentle sways with arms around shoulders were to be had all round, it was a pity this scribe attended the gig minus the significant other. So it goes. Who knows where Ms Barnett will end up next, but I seriously doubt her new converts will be left disappointed.
Words by R. Jackson