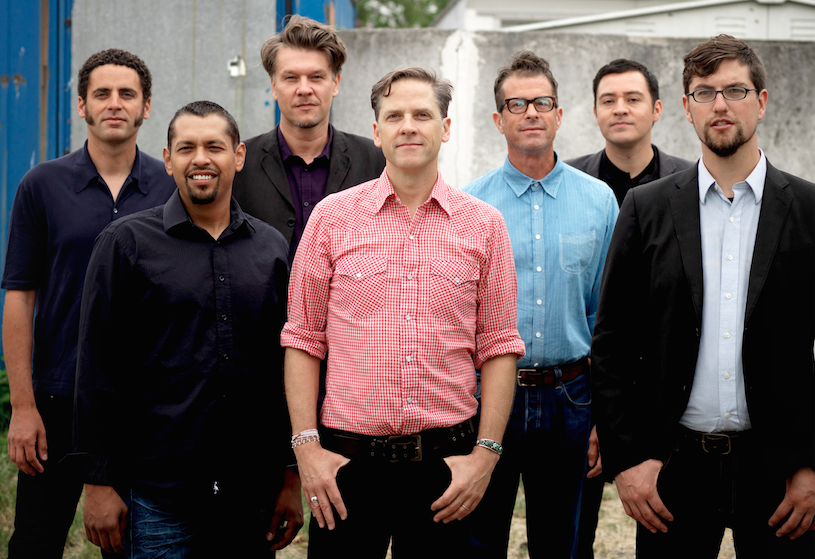 Sometimes, watching a band you’ve listened to on record perform live for the first time can be a double-edged sword. Unfortunately for Calexico, their show at the Philharmonic Hall in Liverpool tonight is one of those occasions.

On their latest record Edge of the Sun they took a further step away from their luxurious and sun-filled combination of mariachi and Tejano styles towards a strain of Mid-West Americana that strayed dangerously close to country. Sadly tonight their set is, as you might expect from a band touring a new album, chock-full of new material. The bad news is that for the most part, it falls on deaf ears to a seated audience; an audience who, like myself, were expecting to be able to at least have a good shuffle around in our seats.

Calexico are a curious beast – the central members of front man Joey Burns and drummer John Convertino (both previously of LA rockers Giant Sand) are at the core of the outfit, and yet in many ways Burns seems the most detrimental to their live show. Exuding a strange air of artistic arrogance that seems at odds with the generally light-hearted and exuberant nature of their music, tonight he struggles to the point of acute embarrassment to connect on any level with the audience, his mumbled and apologetic patter causing more than a few nail-biting tumbleweed moments. We’ve all heard the first rule of performing; the show must go on. It seems Burns might not be au fait with this particular notion as he admits to us “sorry folks, this just ain’t happening tonight is it?” and as we collectively sit in silent agreement he adds “Lord have mercy” before sighing heavily.

It’s fair to say that Calexico are collectively having what we commonly refer to in the Northwest as a shocker this evening – plagued by technical difficulties and a flat crowd, they just about stumble their way through the first half of the show. There’s no denying that they’re at their best when in full mariachi mode, undiluted by their more Western influences – in all honesty, the less time Burns gets at the forefront the better the band seem to go down with the crowd here tonight. Tracks like the majestic instrumental groove of ‘Coyoacán’ and the infectious hip-sway of ‘Cumbia de Donde’ are instant hits and inject some much needed life into the flat-lining atmosphere. Full credit has to go to the exceptionally tight live band and effervescent energy of trumpet player Jacob Valenzuela and guitarist Jairo Zavala who single-handedly manage to save the show and make sure everyone leaves with a smile on their faces.

Judging bands on one performance is never an easy task and it would be unjust to tar Calexico, an undoubtedly superb outfit of musicians, with the brush of one bad gig. Just about saved by the skin of their teeth and in classic mariachi style, the Arizona natives live to fight another day, but they might want to think again about who the real stars of this band are and allow them to step out of the shadows and into the spotlight a little more.