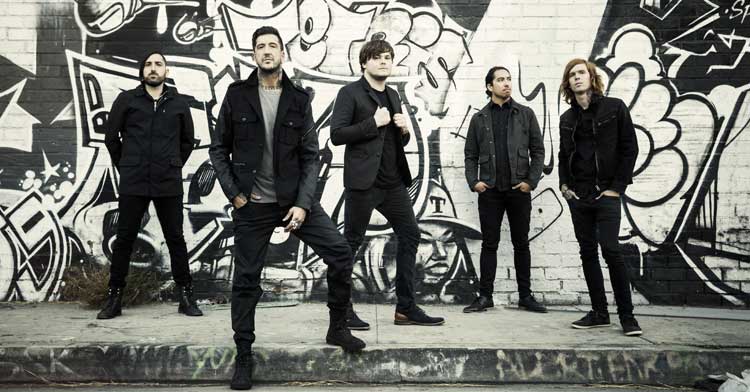 The queue for Of Mice & Men’s final UK show stretches from the venue, past the student union building and snakes down Oxford Road to the museum, leaving passers-by wondering who on earth is drawing such a large (and loud) crowd. The air is punctuated by impassioned screaming of fans every time frontman Austin Carlisle is possibly sighted on the venue’s balcony.

When doors open, the venue is flooded with fans, giving openers Volumes a sizeable crowd to play their unique brand of metalcore to. The Californian mob’s six-song set is short, sweaty and brutal, with crushing riffs and breakdowns aplenty during songs like ‘Erased’ and ‘Wormholes’ getting the crowd in the mood and moving.

Mains support act The Amity Affliction are seasoned veterans. The band have been touring incessantly for 8 months, and the gig marks their last until Warped Tour, but it is impossible to tell. The band pour their heart and soul into their performance, led by vocalists Joel Birch and Ahren ‘String’ Stringer, tearing through a selection of material from their 3rd and 4th records, from ‘Open Letter’ to ‘Greens Avenue’ to ‘Lost & Fading’ and ‘Don’t Lean on Me’. It’s an emotionally charged set – the band are finally getting the recognition they deserve in the UK, and it’s clear from the enthusiastic response they get that they’ve successfully won over a lot of people on this tour.

However, that response is almost lacklustre in comparison to that elicited by the appearance of the headliners. Carlisle draws every eye in the room to centre stage and has the crowd spellbound from the second he lifts the microphone to his mouth.

The band’s 15-song set is a mix of newer songs off their latest release ‘Restoring Force’ – ‘Would You Still Be There?’ has the entire crowd drowning out Austin and fellow vocalist Aaron Pauley not to mention older favourites such as ‘O.G.Loko’ and ‘Let Live’. The encore, comprising of ‘The Depths’ and ‘You’re Not Alone’ brings some in the crowd to tears, and a lump to the frontman’s throat. It seems that Manchester has given the bands on the Full Circle Tour the best end to this run – one thing’s for sure; this city can’t wait for these guys to come back.