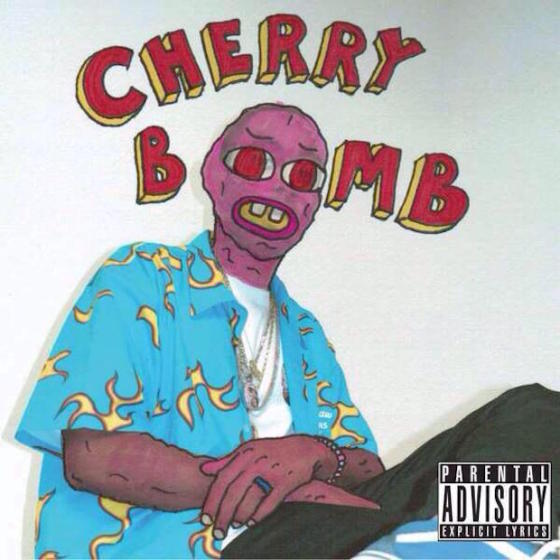 Controversy courting rapper and reluctant voice of a generation Tyler, The Creator has just released his fourth studio album Cherry Bomb. The latest material surfaces amidst new records from fellow Odd Future collective members Earl Sweatshirt and Frank Ocean, but how does the ringleader fare alongside his contemporaries?

Comparing his output to Earl’s new offering is interesting and gives a more rounded view of the success of Odd Future as a sum of their collective parts rather than any individual genius. Where the heavily oppressive Vicodin introversion of Sweatshirt ultimately stagnates without the balancing force of his collaborators, likewise the ADHD acid trip of Tyler’s new record lacks the dynamic emotional range of Frank Ocean at his best. When combined, these unique personalities create an alluring whole – taken alone, they’re more interesting as snapshots of the differences in human experience.

As per usual with a Tyler album, Cherry Bomb is at best a mushroom trip through the inner workings of a young mind moulded by rampant capitalism pushing brand labels, Adult Swim, YouPorn and a pervasive teen culture of nihilism – at worst its a convoluted and disjointed cluster of ideas. The sketches thrown up on tracks like ‘2 Seater’ are difficult to unpick; is there an element of social commentary that Tyler is attempting to articulate or is his extended adolescence simply running away with itself? Is he referencing the inevitable overground expansion and dilution of the counter culture which gave birth to him? It’s sometimes hard to tell whether he’s maturing into a serious artist or simply sticking two fingers up to us all and doing whatever the fuck he likes. Some would argue the two are the same.

There’s still a sexualised aggression and a pervading sense of railing against the system in much of the new material, noticeably on the intense ‘The Brown Stains of Darkeese Latifah Part 6-12 (Remix)’ but interestingly now contrasted by tracks which give a glimpse of a softer side, with the semi-romantic lament of ‘Fucking Young / Perfect’ – a confessional about a relationship with a youngster that could easily be autobiographical, as he croons “I don’t want to be another statistic”. There’s a sense on this song in particular that Tyler’s rarely seen soft underbelly is locked in a power struggle with his public persona – a scornful and acerbic cultivation that he wears like armour and occasionally, tantalisingly, slips away giving a glimpse of a young man as scared as any of us.

Taken as a whole, Cherry Bomb is a scatter-shot offering that reflects the society that’s given birth to its Creator – in places seedy, dark and disconnected; in others resonating with a blissful ignorance of reality that sucks in influence from the jazz, soul and swing of The Good Old Days and poisons and perverts them with a chemical hue. Never boring, always challenging, it’s another solid offering from one of the more interesting young minds that we’re lucky to have combating the mainstream – the question is, how long can he continue to rail against an institution that’s slowly assimilating him?