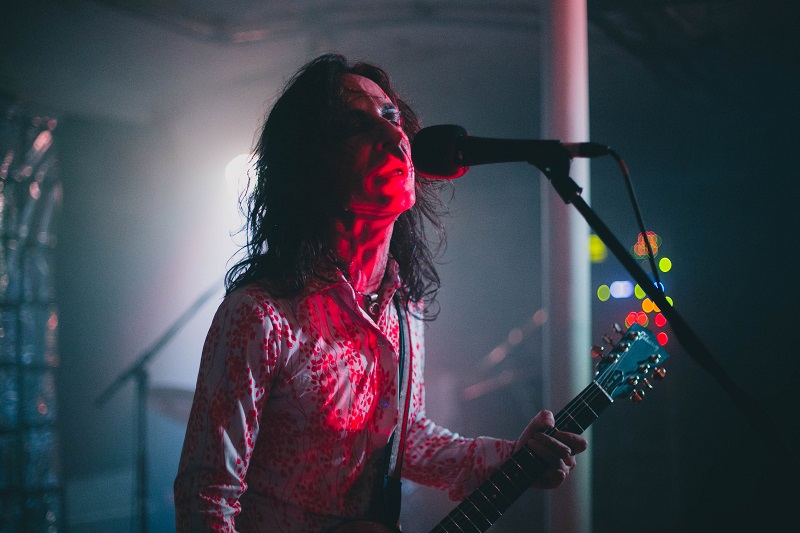 From space to Snowdonia: an interview with White Hills

On the first leg of their first 2015 European tour, we sent writer Jennifer Ho and photographer Sam Huddleston along to the Islington Mill to catch up with White Hills vocalist and guitarist Dave W for Glasswerk:

How are you feeling about the tour?

Good and the body clock is great. Flew over from New York, didn’t drink on the plane and it ended up working out perfect. Even got to see The Heads last night.

So the new album, Walks for Motorists, how did that come about?

We recorded the record at a studio called Bryn Derywn in Wales, just outside Bethesda, right outside Snowdonia. The studio was in was the home of a person who ran a functioning slate quarry just across the street. Where we stayed there was a book from the early 50s called ‘Walks for Motorists in Snowdonia’.

Are you a motorist or bipedal person then?

Though I spent a lot of the time on the road, I’m definitely human.

This is the first time you’ve ventured out of New York to record. How much did recording in Wales affect your sound?

We demoed all the songs on the record this time, which we really haven’t done before. We were very precise with that we wanted the songs to be, so we physically demoed the full sketch of the songs.

Being in an open space really helped with trimming away the fat in the music. Previously, our records have been really dense: one, maybe two guitars. This time, it’s mainly bass, drums and synthesisers.

I equate it to what nature’s like: nature can’t be too much or too little. It’s exactly how it should be and that’s what Wales helped formulate.

You also recorded with David Wrench, of FKA Twigs, Jungle and Caribou fame. Why?

We specifically wanted to use David because he isn’t known for the music we play. We were looking for a change, and since David’s more known more dance orientated music, he was perfect for adding a strong rhythmic aspect to the record.

Besides the sound, how did the song writing process change?

This time we had time. We typically write on the road, come up with ideas on the road, mess around with them a little bit between sound checks and when we come off from being on the road.

We were in New York for a period of time and we knew we needed to make some changes. So we fired our drummer and Ego and I started a challenge: we would write a song a day with the goal to have as many songs a possible. We did this until we had close to 60 songs between us and that’s when we trimmed it down.

Psychedelic music’s having a bit of a resurgence these days. What do you think when people label you ‘space rock’?

When I started the band, being a psychedelic band or space rock band was not a popular thing. I knew I wanted to make spacey, rhythmic music hence the term ‘space rock’ but we’ve moved on now so much from that. When I started the band, I knew it was better for me to put a tag on it rather than someone else. Sometimes I kick myself in the head thinking I never should’ve said space rock.

If not outer space, where will White Hills go next?

I don’t know. It’ll go on as long as I decide it’ll go on and I have no desire to do anything else. We’ll just morph and gel into all kind of things people would never think we would and this record is just a part of this process.

The record was a part of making a change, and we’re on a path of trying not to say ‘no’ to whatever we want it to be. I’m on a very content path, and I’d like to keep this headspace.