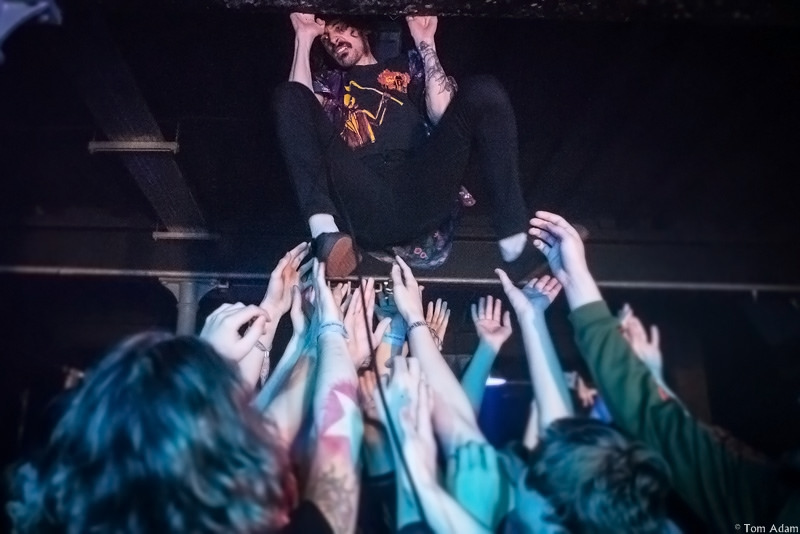 When openers Hyena take the stage, the Telford four-piece are playing to a room that’s mostly empty, but that doesn’t seem to faze them at all. The alt-rock quartet have an easy presence on stage, which is only backed up by some serious tunes. Previously members of a band called Weatherbird, this lot are ready to put Telford on the map with their unique approach to rock and roll, and with latest single ‘Mental Home’ (produced by Tom Dalgety of Royal Blood fame) getting the slowly growing crowd moving, it’s only a matter of time before Hyena are playing to full rooms themselves.

Main support Dolomite Minor have none of the previous band’s ease on stage; hailing from Southampton, the duo barely speak on stage, but with songs as good as ‘Talk Like An Aztec’, ‘When I’m Dead’ and ‘Let Me Go’, they can definitely get away with letting their music talk for them. Their eclectic brand of groove-laden rock is intriguing and impossible to stay still to.

Turbowolf are a live act like no other. It is frankly impossible to convey their live aesthetic to anyone who has yet to see them. Front man Chris Georgiadis is a lunatic, throwing himself around the stage, over the barrier and into the crowd from the rafters, all whilst singing. The set list is a mix of old and new, with the band playing songs of their brilliant new record ‘Two Hands’ – from older tracks like ‘Seven Severed Heads’ and ‘A Rose for Crows’ to newer songs ‘Rich Gift’ and ‘Rabbit’s Foot’, the energy is unmistakable, the entertainment is undeniable, and the whole crowd is going absolutely crazy.

Things get even crazier when yours truly is pulled on stage, presented with flowers and given free reign with the keyboard. A night to remember, and a band everyone needs to see at least once, Turbowolf are a band best experienced live. Just note: you’ll leave battered, bruised and shaking your head in wonderment, wondering if it all really happened.