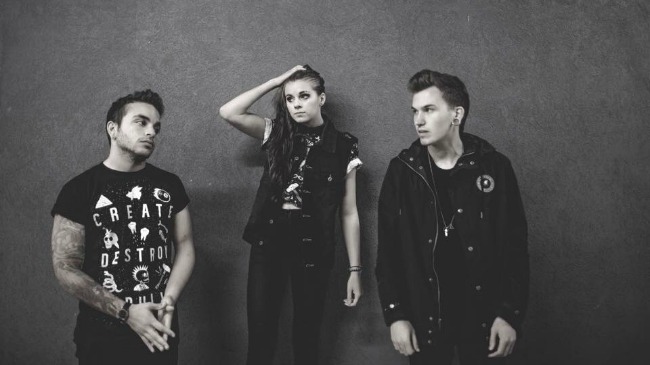 The Barfly has become a rite of passage in all successful bands’ careers and this night was no exception. With newcomers Twin Wild and Light You Up supporting PVRIS at their sold-out show (the 5-seconds-and-the-tickets-have-evaporated kind of sold-out), The Barfly was absolutely rammed with new talent.

Unfortunately missing Twin Wild by seconds, there’s no first hand commentary on them; however, they seem to have effortlessly won the hearts of many so it can only be assumed that they made an impression. They’re also supporting We Are The Ocean on Friday 22nd May, so there’s still a chance to catch them as a support before they take off.

Next up were Birmingham 5 piece, Light You Up. For such a young band they’ve already managed to build up a pretty loyal fanbase with Light You Up Tees darted all about the place. With a front-man resembling Jordan Catalano and pop-punk hometown teenage-angst-ridden songs, you know exactly what their audience is. They’re hardly revolutionary but it’s easy feel-good listening. One thing is obvious and that’s that they feel at home on stage, with frontman Tom effortlessly engaging with the crowd. Light You Up have a lot of work to do but their future looks promising.

Now, PVRIS. With THAT album, it’s hardly surprising that their debut UK show that sold out in a matter of seconds became the most anticipated gig of the year; despite being so new, they’ve been talked about so much lately that it almost seemed a bit bizarre to be seeing them in such an intimate setting. Moments after they took to the stage it became evident that this would be the last time anyone would be able to see them at the Barfly. Opening with ‘Smoke’, it took them a good few songs to fully warm up, but once they were comfortable they became next to flawless.

The thing with PVRIS is that with songs so superior, it’s easy to forget how undeveloped they really are; there were elements of the show that gave that away – unrehearsed songs, stalled intros and technical difficulties – but in all honesty none of that mattered.
Frontwoman Lynn Gunn is undoubtedly a star with an aura seeping with talent and that’s before we even start on that voice. It’s inevitable that PVRIS are going to be massive and it’s only going to be a matter of time before they take the jump to stadium support.

They’re currently supporting LTA on their UK run and will be playing Slam Dunk Festival later next month. Go see them. Now.