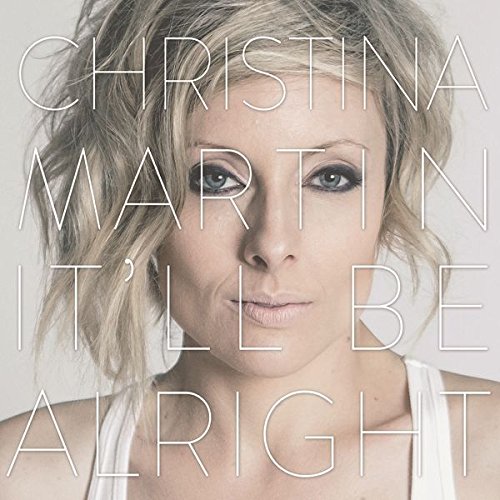 Christina Martin may not be a well known name to UK audiences – yet. But this ten track album of soft rock ballads and anthems may well change that. It’ll Be Alright is actually the fifth full length release from the singer songwriter, raised in Canada and now based in Halifax, Nova Scotia, but actually born in Florida. Martin’s previous album have ranged from folky acoustic to the alt country feel of 2012’s Sleeping With Strangers, but this time the production is much bigger, with solid drum beats and driving guitar riffs aplenty.

But what stands out on every track is the strong emotional delivery of Martin’s melodic vocals. She doesn’t so much sing her songs as live them, the emotions so real. Her voice has depth and power, but also subtlety and there is an occasional catch that adds emphasis quite beautifully. Think Ann Wilson from Heart with just a touch of Total Eclipse era Bonnie Tyler. Martin’s backing band also shine throughout the album and some of the guitar work from her husband Dale Murray is very good.

The title track and lead single It’ll Be Alright opens the album at a fast pace, the guitar melody setting the scene for the vocals. From the start Martin is on fire, hitting every note and adding emotions aplenty to a fine love song. And there are several other very good tracks to come. Puppet Master is quite superb, the sultry vocals starting slowly and then soaring as Martin stretches her voice beautifully for the chorus. Keyboards provide the melody and a lovely guitar solo adds bite to the track.

You Don’t Have To Leave Tonight starts with an organ’s swell, Martin’s voice slow and tender before the pace picks up. But this one simmers rather than fully coming to the boil and the effect is full of passion and longing. Things You Can’t Tell By Looking Her Way might be a bit of a cumbersome title but the track itself is upbeat and vibrant with the kind of anthemic chorus that will stick in your mind.

Lines is the best of the slower songs, full of emotion and hope. You Ran From Me starts and stops nicely and when the pace picks up Martin’s vocal performance is typically passionate. I’ve Got A Gun has an real edge of menace but the repetition of the title perhaps becomes a bit much. The closing track Somewhere With You ends the set nicely with a rocking beat, a lovely bass line driving this one forward.

There is something of a retro feel here to what is a very good and modern sounding album. Part 70s California, part 80s AOR, yet with a clean production ethic that gives a dynamic sound. And you can tell that these songs are going to sound great on stage with a full band. Christina Martin offers up a very good collection on songs– and her work is well worth checking out.