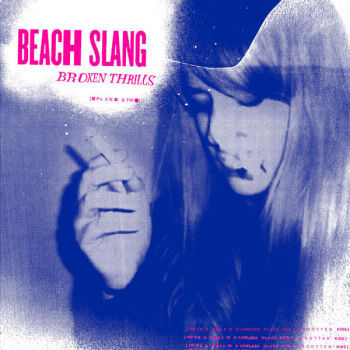 Beach Slang are the new Philadelphia-based 3-piece led by former Weston guitarist James Snyder. The pop-punk juvenilia which that group dealt in has here evolved into a more mature, expansive sound. Broken Thrills collects the band’s first 2 EPs onto one handy LP for their UK debut.

The collection comes roaring out of the gate with ‘Filthy Luck’. The first sounds you hear are a torrent of guitar and drum rolls worthy of a Bob Mould composition, before settling into an anthemic jangle befitting that other titan of ‘80s college radio, Paul Westerberg and The Replacements, Snyder growling “I’m a slave to always fucking up/ It’s not OK but maybe it’s enough”. The second track ‘Kids’ follows much in the same vein, the same widescreen guitar and throaty Westerberg-esque vocals. I’m trying not to hammer the Replacements comparison too much here, but hey…getting compared to one of the greatest American bands ever isn’t the worst thing in the world.

The momentum takes a bit of a knock by the third track ‘Get Lost’, as the band tries to dial back ever-so-slightly; the chugging guitar a little generic; the vocals a little one-note; the lyrics replaced by “whoo-whoos” by the song’s end. ‘Punk or Lust’ picks things up again in a big way, possibly the most well-developed song here, with its shout-along chorus, insistent melodic bassline and snappy breakdown: a highlight.

The second half of the collection, comprising the ‘Cheap Thrills On A Dead End Street’ EP, dials things back ever so slightly: bright, insistent guitar leads taking place of the big, ringing chords of the first EP. A word has to go out to the guitars on this whole LP actually, handled solely by Snyder, the guitar sound on this thing is HUGE! The big, modern production helps this thing sound current and escape the shadow of its ‘80s college rock and ‘90s alt influences. The band switches it up on the last track ‘We Are Nothing’, bringing in an acoustic guitar sound which is a nice fit for the yearning romanticism of the vocals and lyrics which pepper the whole LP.

All in all this thing is over quickly (just over 22 minutes) and the whole record has this propulsive drive so it’s quite easy to gloss over its more generic or mediocre moments, as before you realise, the next track is already beginning. A fizzy, sugar-rush of an LP then, and if they don’t quite have the anthems to match the anthemic sound just yet, this band has bags of promise…And it will sound great at your next BBQ…