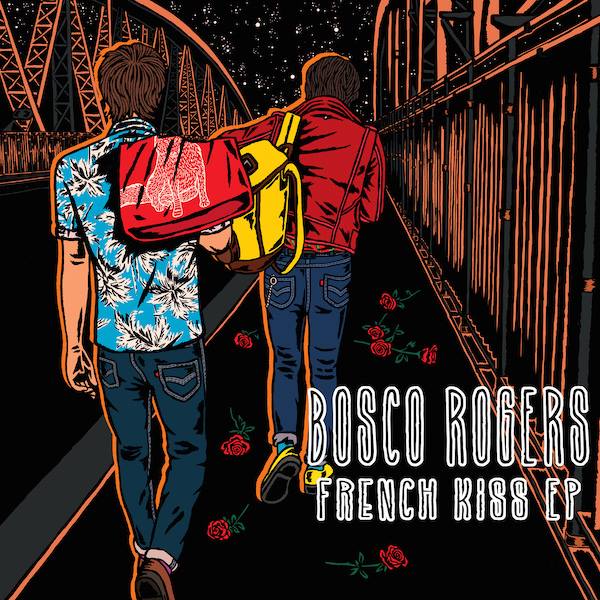 Coming from the sunny South, Bosco Rogers have acquainted themselves well with a sound that defines the greener pastures which they may well have experienced in their hometown.

Elsewhere defined as “flower punk ruffians”, their newest offering comes in the form of their forthcoming EP entitled ‘French Kiss’ and doesn’t do much to get in the way of this description. They are, on the face of it, just two people; Barth and Del. Interestingly however, they use a live band in the studio, giving the two-piece an intriguing extra dimension on record.

The use of the female vocals to harmonise with the two lead males throughout isn’t a revolutionary tactic but is going to give regular boys club indie-rock a run for its money, and their exhilarating sound of upbeat punk with a splash of psychedelia definitely takes you way back to the 60s. Erratic-sounding, jangling, distorted guitars are constantly experimenting in their interplay with the keyboards, alluding to the idea that this is the kind of band that will one day be synced on the soundtrack of the posh snobbery-on-the-wall reality TV of Made In Chelsea, arrogant indie swagger and all.

Really, this should come as no surprise – the music itself is something to be arrogant about; with the swing in the drums it’s easy to imagine the sway of summer dresses and the smell of factor 50 on a ginger kid.

‘French Kiss’ isn’t just an EP, it’s a drunken joy ride down a country lane at the peak of an English summer.