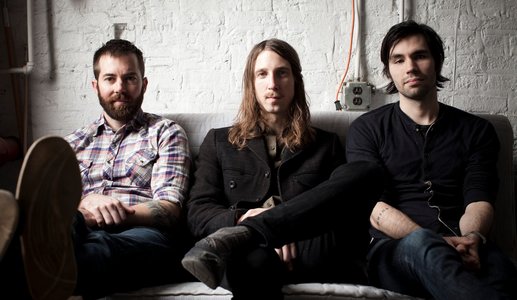 Leeds’ legendary music venue The Brudenell Social Club, has played host to an eclectic mix of bands, but chances are, no band quite like Russian Circles have passed through before. The instrumental experimental rock trio, hailing from Chicago are hitting up several venues in the UK on their European tour and are playing to sold-out venues almost every night with their unique take on post-rock.

Opening for Russian Circles are Helms Alee, are an experimental rock trio from Seattle, Washington. Their ten-song set is a fusion of grungy bass, the eerie vocal stylings of drummer Hozoji Margullis and sludgy metal riffs. From ‘Pleasure Centre’ to ‘Paraphrase’ the trio capture the interest of the slowly filling venue.

Russian Circles are an odd band in that they keep interaction with the crowd to an absolute minimum; this doesn’t seem to stem from awkwardness or arrogance – far from it. It is almost as if the band want their music to speak for them instead. The three-piece are comfortable and assured on stage, and their set, spanning 9 songs is a mix of songs from their extensive back catalogue; opening with the hypnotically doom-laden ‘Deficit’, the band tear through over an hour’s worth of material.

The room is packed with gig-goers of all ages before their set begins, and all are in awe of the music washing over them; the atmosphere is reverent and the crowd is spellbound. As the last notes of set closer ‘Death Rides A Horse’ ring out over the heads of the crowd, the band leaves, knowing that their music has said and done more for them than words ever could.