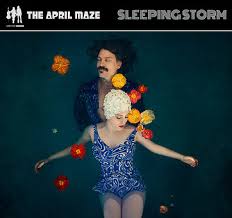 Anglo-Australian husband and wife duo The April Maze return with their second UK album. Todd Mayhew from Melbourne and Sivan Agam from Oxford have a very individual approach to music and their generally dark tales are backed by a form of folk music that draws from wide influences. Mixing some lovely vocals, individual and harmonies, with guitar, banjo and cello results in a rich musical canvas on which their stories can be painted, and the results are well worth hearing.

This collection of songs has perhaps more musical variety than the pair’s past work. I’d actually hesitate to call it a folk album as at times is heads into folk-rock, prog and indie territory. There are elements of country and bluegrass in the mx too. But somehow they seem to know how to make the disparate elements come together into a unique and pleasing musical style.

There are some very good songs on this album. The slow title track is evocative and deep, with Agam’s vocals soaring over the grumbling cello. The album’s first single, I’ve Seen The Rain has a melancholy air, with Mayhew’s smooth vocals working particularly well. Scout Hall, a banjo led telling of the duo’s initial meeting and the genesis of their love is very good. Homeland, another slow song, is perhaps the most passionate of all, an intense sense of longing coming through strongly. And the final track of the album, the folk-pop Sparks, has a delicate beauty.

But perhaps the pick is the The Bishop Who Ate His Boots, a dramatic and western sounding tale of a polar explorer caught in bad weather without supplies. He survived for over seven weeks by eating his boots. It sounds great, a dark and quirky tale – but what makes it even more remarkable is that it is a true story, and the man in question was Todd Mayhew’s great-grandfather.

The April Maze do things their own way, and that’s clear from this very individual collection of songs. There is a deep and haunting feel to many of the tracks, the cello beneath the two very different voices providing real depth. The vocal interplay is beautiful and the lyrics deserve close study too. Sleeping Storm is an album with an appeal that should extend well beyond the folk world.