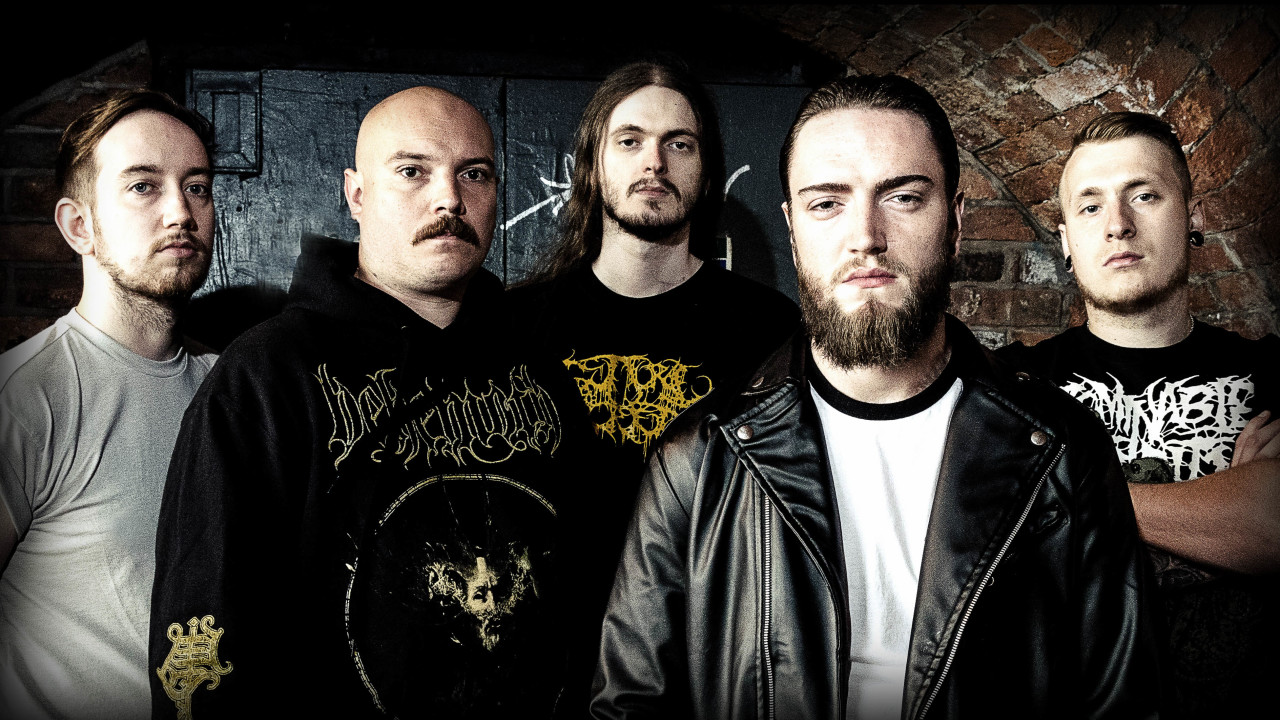 Mancunian deathcore mob Ingested have been a band for nearly a decade, and seasoned veterans of touring life. Iqra Choudhry caught up with vocalist Jason Evans and drummer Lyn Jeffs following their set at the final Impericon Festival of 2015 and talked about good shows, taking on the US and a surprising reverence for Prince.

You guys have just played the last of your Impericon Festival shows – how did you find the hometown show?

Lyn: And the best.

Jason: (laughing)…and the best, I think. The crowd were great.

For how early on in the day it was, you guys did really well!

Jason: It made me proud to be from Manchester.

Manchester always brings it; I’m Mancunian myself, and it makes me pretty proud to see reactions like that. Whereabouts are you guys from?

Jason: He’s from Wales, but the rest of us are from Stockport way.

(Cue a chat about the different bits of Manchester until I finally come back on topic) So, ‘The Architect of Extinction’ came out in January and I read a review of it that said it was a big step up, and that you guys had ‘finally arrived’. How do you feel about the response to the album?

Lyn: We’ve been digging at it for over 9 years – when you record albums and EPs, you do tend to find your sound, eventually!

Jason: It took us 3 albums and an EP. We’ve just been constantly changing; we all listen to such a wide variety of music, and that influences us. Listen to our albums, and you can hear the difference – we’ve kind of grown up. The 1st album is sort of the most offensive things we could think of, death-metal-wise. The 2nd album was sort of like we were listening to a lot more deathcore, and that influenced that album. With the 3rd album, everything just fell into place.

Lyn: We weren’t trying to latch onto anything. We took a break and went into the studio and put out the EP. We finally just found it.

Jason: We’re the band we always wanted to be, now.

What’s your favourite song off the new record?

Jason: Divine Right of Kings, that’s probably my favourite one. I love playing it live.

Lyn: I don’t think we’ll ever be brave enough not to play it.

Jason: We’ve been playing it for so long – almost 10 years. When we play that, I don’t even think about it, it’s so natural. That song is great. I love playing that live. I love seeing the reaction. You hear everyone shouting the words back and you think ‘this is the reason why I do this’.

Lyn: The energy today was something else.

One thing I always like to ask bands about is their first gig – what was yours?

Lyn: Mine was Ozzfest. First band I ever saw was Raging Speedhorn. And the drummer drove us on our last tour too, which was crazy.

Jason: Mine wasn’t quite as cool. It was at Academy 2 (pointing to the venue in question out of the window). It was Disturbed and it was on the ‘Down With The Sickness’ tour. I think I was 14, and I’m 28 now. But the week after, I went and saw Limp Bizkit on the ‘Hot Dog Flavoured Water’ tour at the MEN, and that was amazing.

What was the first gig you guys ever got paid for, as a band?

Jason: That’s a good question, that; no one’s asked that before. Erm, probably Incestfest?

Lyn: No, because I put that on.

Jason: You did, yeah, so we didn’t get paid.

Lyn: I definitely didn’t pay us.

Jason: What did we do after that?

Jason: Yes, it was! We probably got paid about twenty, maybe thirty quid? (laughs) Money’s money, isn’t it? We just care about playing.

And what was the worst gig you’ve ever played?

Lyn: The one at the school!

Lyn: It’s a toss-up between that and another one.

Jason: It was in a school hall in the middle of nowhere in Belgium. We nearly got cancelled, and then it was moved to a different venue and nobody turned up. Barely anyone.

Lyn: There were like 4 people there. It’s either that show or Milton Keynes.

Lyn: (laughing) Yeah. I think it was Hang the Bastard – as soon as they finished, they all left. And we were like ‘whatever, let’s just get pissed!’ But that was pretty bad.

Jason: The good shows outweigh the bad ones, easily.

Lyn: You always remember the shit ones.

Lyn: But we won’t forget today.

Who are you guys sticking around to see? Who are you looking forward to later on?

Jason: I definitely want to stick around for Suicide Silence. And I wanna see Stick To Your Guns. I’m not a massive fan of hardcore, but I’ve got a soft spot for certain bands.
I’d go see the guys in The Ghost Inside if you guys get a chance – those guys bring it live, every time.

Lyn: I think it’s nice to be at a festival where you can get a chance to check out bands that you’ve heard about, but not heard.

Jason: I saw The Ghost Inside at Moho (a tiny little venue in Manchester’s Northern Quarter) and that was awesome.

You guy are doing another festival and then a London show at the end of June. And then a US run in September – are you looking forward to it?

Jason: Yeah, we can’t wait. We’ve been wanting to play America since the beginning, really.

Lyn: The timing’s never been as good.

Jason: Yeah, the timing’s perfect. We’ve never – we always thought we were ready, but now, with how everyone’s responding to us at the moment, we know that we’re ready for it. We’re just gonna go out there and make the most of it.

Bands always say that crowds in the US are different from the crowds over here. You can go over there and whether or not you do well is a completely different thing.

Jason: It’s the gamble you’ve got to take, though isn’t it?

Well, good luck for it! Have you guys got any studio plans?

Lyn: We’re always writing; we write continuously and sort of have a bank of songs that we take or don’t take. I think we just wanna get this year out of the way. It’s been the busiest year we’ve had, definitely.

You’ve got a couple of months off over summer – are you going to any festivals this year?

Lyn: I’m going to a festival over the solstice, it’s a really small one – there’s only like 250 tickets.

Jason: I’ve not got any plans, to be honest. I’m looking forward to playing in Manchester again in August at Sound Control with Thy Art Is Murder. That last Thy Art Is Murder album is epic. They’re so sick live.

Lyn: What is it with Australian bands right now? They’re all killing it.

Jason: Speaking about longevity, here’s some advice. I think the key is: don’t make a band for the sake of making a band. We’ve all had the luxury of being that close; we’re all best mates. We’ve been Ingested for 9 years and we haven’t had one line-up change. That’s pretty rare. We’ve stayed the same 5 old faces, and for us that’s one of the keys to our success.

Jason: And another thing is – make music for yourself. Don’t try and please other people. The way I look at it, if you asked me who my favourite band is, I’d say my band. I’m making the music that I want to hear.

Jason: Prince doesn’t count, though. Prince is something else – the guy’s a God.

Jason: Collectively, yes. But if you ask someone ‘who’s your favourite band?’ and they’re in a band and they don’t say their own band, they’re not doing it right. The luxury of being in a band is that you get the opportunity to make the EXACT music that YOU want to hear. And especially with our new album, that’s how I feel. It’s the death metal I wanna hear. So, my advice is make sure you have the right people, and make music for yourself and that’ll show through. Your passion for your music always shows. The music is the most important thing, definitely.