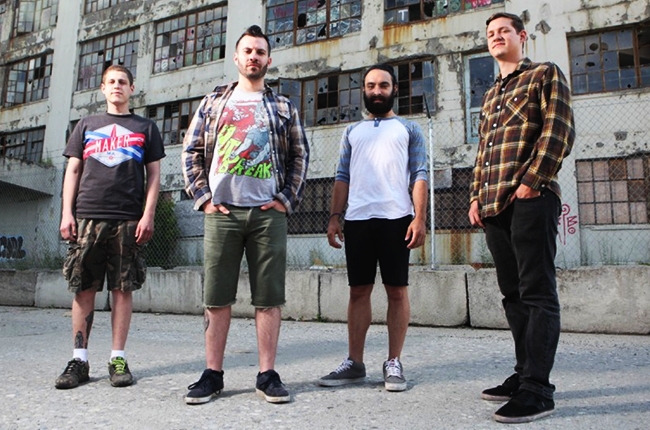 Glasswerk writer Iqra Choudhry caught up with Jon Markson from Such Gold at their show in Newcastle recently supporting Transit to talk about touring in the UK, latest album ‘The New Sidewalk’ and the best hot dogs in Manchester. Obviously…

So, how would you describe Such Gold’s sound to someone who’s never heard you guys?

You guys have been on the road with Transit and Crooks for a little while. How have the shows been so far?

It’s been great. We started the tour at Groezrock in Belgium. We were there in 2012, and the set was awesome and we’ve been looking to go back ever since. It was the best way to start this tour, because we got to play a really cool festival date with a lot of really enthusiastic kids and we don’t really get to play to that many people. We’ve known the guys in Transit for years; we been touring together literally since the dawn of time – we’re having a great time together! We just did a US tour together last year; once with Transit headlining, and one where we were both supporting Four Year Strong, so we only recently had a nice excursion together, it’s nice to be traveling together.

How do you find crowds here in the UK? A lot of American bands say it’s a different vibe.

It’s definitely a different vibe, but right now we’re really energised by that vibe because people are being really appreciative of what we’re doing. We haven’t played here in a little over two years; we wish we could play here more and hopefully we will in the future. But, that being said, people are showing a lot of support for us being here, and making us feel very at home, and having a lot of fun at the shows, and that’s kick-ass.

You guys are playing Slam Dunk Festival at the end of the month, are you excited?

Definitely! I mean, we love playing festivals especially festivals away from home and overseas, because a) the people who organise the festivals treat the bands so well and b) the fans are great. It’s just a very celebratory time, and I personally love that.

This is going to be my 3rd Slam Dunk Festival. Have you guys ever played there before?

You’ll love it! The atmosphere is great; crowd-surfing, stage-diving – if you’re not dying of tiredness by the end, you’ve done it wrong. And the afterparty is pretty awesome.

Well, we’ll be there!

We wish we could be here longer, and play more festivals, but we’re excited to be doing so many club shows. We have this week and a half in the UK, hitting a lot of places we really like to play and then we have about a week of club dates in Germany, and a show in Paris and in the Netherlands. Then we come back to the UK for a few days and play Slam Dunk! It’ll be cool to have two runs in the UK.

Hopefully the weather will be better on your next run!

It’s not been too bad – it was fine until about 25 minutes ago! (It’s raining pretty heavily outside).

Well, I’m from Manchester, so this doesn’t count as rain – it’s just drizzle.

It’s got a reputation for being a rainy city – if you have a chance, you have to check out some of the awesome food places (I end up recommending an underground hot dog bar around the corner of the venue, and the conversation goes off on a tangent). The hype around your support act, Crooks, is crazy. They’re playing a few festivals this summer too – do you reckon they’re going to blow up?

I dunno, I think they’re a cool band and I hope they continue what they’re doing. The thing I like about Crooks is that they’re all committed to making music that they’re comfortable making, and that’s dense, forward-thinking alternative-driven music. They have their heads in the right place.

What’s the first show you remember going to?

Probably a local show – a lot of the people we associate with as a band are our peers – we all started out going to local shows where we idolised local bands. You’d go see a local punk show and think ‘this is the truth! I wanna be doing this!’ and your scope changes over time but it’s still that same feeling. You go to see people that you respect, and your peers doing what they love. The first show I remember going to was just a local punk band playing. And I’m sure the other guys from Rochester, New York would probably say the same.

There’s an awesome gig scene back home in Manchester, and an emerging punk scene here in the North East. What was the first gig you remember getting paid for?

Probably the same kind of show! A local show that we got paid 50 bucks for, or something. I remember the first time a band of mine did a short tour – like, three shows in a row, that was a really good feeling. We’d get paid and use the money to put gas in our tanks; we probably lost money, but it was the feeling of travelling and playing. That element of minstreldom, of doing something like that, and I know everyone that’s doing it probably feels blessed to be thousands of miles away from where they’re from, doing this for people who wanna hear their music, wanna see those songs live. Around 16 or 17, I started playing shows; once in a while we got paid 50 bucks, once in a while we made 20 on t-shirts, spent the money on recording, convinced our parents to give 25 dollars to drive 45 minutes away to a show we weren’t getting paid for, and thinking that was crazy. And now we’re in England!

And here you are, in a dingy club venue, surrounded by bins – if you’re out after the gig tonight, Newcastle’s a pretty awesome night out.

Yeah, the curfew’s early tonight, so I think we’re going to the pub afterwards!

Occasionally a band comes along that makes you think ‘Holy Shit!’ and forget to breathe, because they’re that good – what was the last band to make you feel like that?

My own band, totally. We just did a headliner in the US with east coast and mid-west shows and a couple of shows in Canada – we took out this band called Tommy Boys – they’re sort of an emo-ish math-rock band from California. But they’re a young band and they’re so good – they only have one record out on Other People records, which is Tom from Stray From The Path and Jesse from Stick To Your Guns and they have a few bands on that label which are awesome.