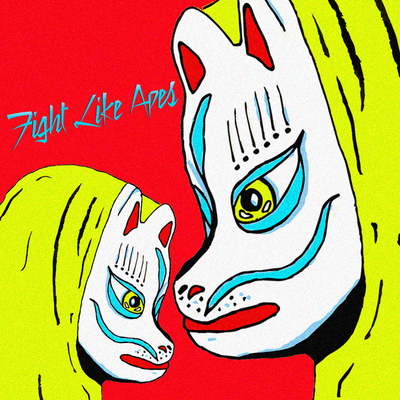 The long awaited arrival of Fight Like Apes’ third album is finally over, and in exceptional fashion; the eponymous album was created with the help of the band’s fans and their own successful Fund It campaign. Not ones to toy with the band’s trademark sound, shimmering keyboards with complicated harmonies are all still in check – it’s as though this band have a “How To Make a Fight Like Apes Album For Dummies” at hand when writing in their practice room back in Ireland.

Having said that, the Dublin quartet will be keeping fans both new and old with the perpetual beer-in-a-field sound that they provide. What is different with this album is that although still fizzing with the irresistible wit, charm and positive demeanour that typifies their earlier albums, it seems as though they are now starting to take themselves a little bit more seriously. The songs have genuine sentiment to them and, more to the point, a lot more sincerity is held within the lyrics. Ironically, this is all dressed up in star spangled boots and bright red skinny jeans, giving the impression that Fight Like Apes are a band built upon the idea of having fun and fun alone.

Lead singer Maykay’s gruff performances are something that sound fragile yet so solid; it could be in the production of the album, but her vocals are incredibly addictive in the way they dictate the mood of the songs from the instant that they start.

With this self-titled offering, Fight Like Apes have written and recorded another great album, a shining addition to the collection on their mantel pieces. Here’s a band that aren’t seasonal by any means, although it would appear that this will be a record to make everyone’s summer a little bit brighter.