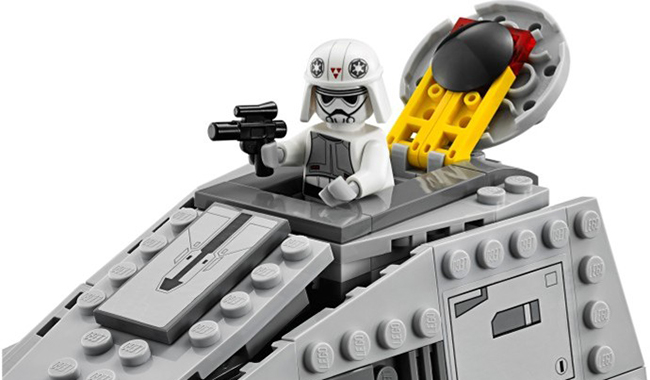 The third set up for review for the 2015 first wave of Lego Star Wars sets is the AT-DP walker. The AT-DP (All Terrain Defence Pod) is another set from the new Star Wars Rebels show which has received most of the attention in this wave. The AT-DP is the third twin legged walker released by Lego following the original trilogy AT-ST and the AT-RT that appeared in the Clone Wars series.

As the timeline would suggest, the AT-DP very much resembles the AT-ST that most would be familiar with from the original Star Wars films. Clearly the intention of the Rebels show has been to bring the Star Wars universe back to looking like the original trilogy, so we are back with normal Stormtroopers instead of the Clone Troopers as well as TIE fighters and Imperial Walkers. This makes the Rebels Lego sets much more palatable to older fans as well while still offering something new.

The minifigures included in the set seem to supplement the set very well.

Firstly we have the two AT-DP Pilots which actually seem to be the pilots of all the ground based Imperial vehicles in the series. They are presented in all white uniforms with white helmets. While the pilots in Rebels seem to be wearing grey rather than white uniforms, overall the minifigures look very good. The printing is very accurate to the series and the use of a printed helmet design on the head piece with an open style helmet works very well.

The Stormtrooper is common to all the Rebels sets and looks the same as the other current style troopers aside from blue air vents on the helmet giving it a little colour. The design on these has pretty much been perfected already so there is nothing really negative you can say about these. Furthermore, stormtroopers are always welcome additions to any set as you can never have enough of these whether you are playing or displaying them!

The final minifigure is Agent Kallus of the Imperial Security Bureau. Agent Kallus is again one of the main villains of Star Wars Rebels. Where the Inquisitor was tasked with dealing with the remaining Jedi, Agent Kallus’s remit is dealing with the Rebel Alliance. In Lego form he is in black with mainly gray printing on the body for his armour and insignia. He also has a new unique helmet design which is perfectly accurate to the TV show. The head of Kallus is printed on both sides giving a choice of expression. This is another great minifigure that really does justice to the character. Perhaps it is the unique helmet or the fact that he is a human, but somehow the Kallus minifigure works much better than the Inquisitor from the TIE Advanced Prototype (75082) set.

The build of the AT-DP is surprisingly quite entertaining for a set that is still only 500 pieces. The ‘head’ section is very well designed and reminds of the larger AT-AT (75054) set from last year. The design of the angles in the head is very innovative and produces a really good accurate looking vehicle. The design also gives perfect access to the cockpit part by allowing not only the entry hatch to open and to be used, or the whole roof part can also be lifted so that the pilots can easily inserted to their respective seats.

The head part also has a good amount of movement. The turret part is free moving on a ball joint and the head can move side to side. The legs however are pretty stationery and don’t allow for much movement. I don’t think this is a big problem with the set though, as with only two legs it would be hard to get a good balance to the model in anything but a few different poses. The sag of the cockpit on the legs looks authentic though and the legs are designed sturdy enough for playing. As expected, the legs are pretty standard design relying mainly on technic pieces which are then covered with various plates and flat pieces.

The finished AT-DP looks really good. The pose of the model as well as all the details in it make it good enough to display if desired. Obviously, the set being part of the Rebels line probably makes it more interesting to younger fans, but this really is the highlight of the 2015 first half Star Wars line up.

There are plenty of play features in the set with the accessibility, flick missiles and a good selection of minifigures. The value of the set is also good for a Lego Star Wars set with 500 pieces and 4 minifigures for under £50.

The Lego Star Wars line up for the second half of the year as usual is promising to give a lot more interesting sets for adult fans, but if you are looking for a good set from the Rebels line up, the AT-DP can certainly be highly recommended.