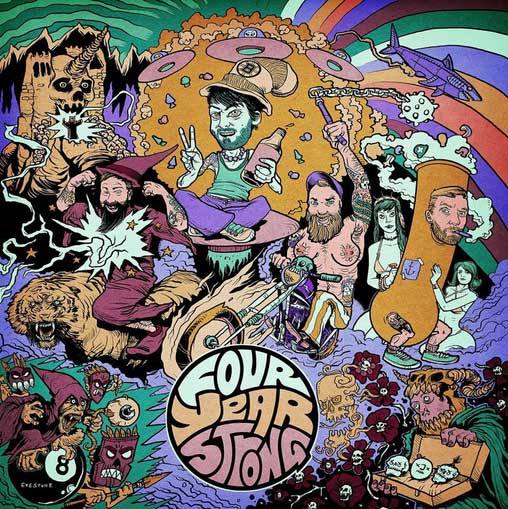 And so they did, with the release of their EP “Go Down In History”. They released a simple, effective and compact release to get everyone’s attention again. Now comes the hard part – are Four Year Strong simply 2 decent releases, or have they got the chops to really make a dent in the pop-punk scene, and be the front runners many saw them to be a few short years ago.

The band have returned with a self titled record that has everything that made Four Year Strong so. The stop start beats, the heavy riffs, the gruff vocals somewhere between clean and unclean, the back and forth between Dan O’Connor and Alan Day. And it’s catchy, so catchy. Each song here has been written for crowds, to bellowed back at the band as they wreak havoc on stage.

Opener ‘I Hold Myself In Contempt’ sets the pace from the get go, while the singles ‘Eating My Words’ and, more so, ‘I’m A Big, Bright, Shining Star’ are so quintessentially Four Year Strong that it’s borderline a joke. And album closer, albeit the title track from the EP, is sublime. But that’s not to say that they’re the best here.

That title is left for ‘Stolen Credit Card!’, an atmospheric opener that quickly turns into the Four Year Strong riffage we’ve come to love. But it’s the chorus and gang vocals which a grabbing, as the boys roar “If you’re gonna tear me down / then you better have both feet planted on the ground”, not to mention the breakdown of the year which could kill any song if used incorrectly. But Four Year Strong make it work as only they could.

But with all that’s here to praise, there is some filler, some repetition, some stuff to be worried about. No, not to the extent that ISWSOF may have led us to believe, as this is certainly a step forward from that. But a step back from the EP. And having an album closer be a slightly reworked version of an already released song seems a bit lazy. It’s funny to think that, the best bits of this record, coupled with the best bits of the EP (all of it) would probably have made the record of the year.

There are many bands out there who claim to have a signature sound, but Four Year Strong are one band who can truly claim to have that. But have they had a return to form? Not quite, but they’ve certainly returned, and we can be thankful for that at the very least.