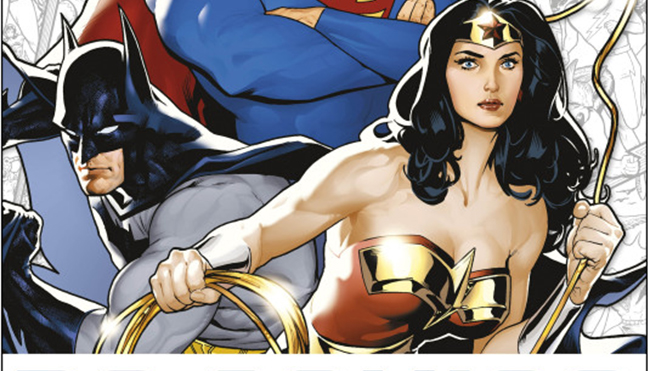 DK have come out with another anthology effort, this time chronicling the journey that DC comics has subjected itself to, from it’s humbling origins to the publishing powerhouse it is today. With it’s roster holding some of the world’s most recognizable characters, this is always going to be an interesting read. And, in this new and updated version, it has a greater, deeper delve into the history of DC.

Shaped within a hard cover slip case, this hardback glossy paged encyclopaedia is a must have for fans of comics in general, whether you are a DC supporter, a Marvel connoisseur or into the more independent type, this is certainly an interesting read into DC built itself into the company it is now.

Each chapter begins with a slight introduction about a year in the life of DC, as the following pictures contain the most significant art from that year. Be it Superman’s first ever appearance in 1938 in Action Comics, how the business fared post WWII, the fall and resurgence of super heroes as a genre, to how it has become what it is today.

Some of the most influential art of the company’s run makes appearances throughout, most notably a 2 page spread on Superman V Doomsday from the Death Of Superman arc. There are also images of the disturbing Joker, Batman having his back broken by Bane, and an elite of Green Lantern officers with their fists in the air, reciting their oath.

There are 2 prints within the slipcase available for framing, and the discussion of DC’s other, outside publications like Vertigo, which stretch in to the far reaches of publication with the likes of Preacher and Swamp Thing, there’s little reason not to be interested in this title. It has everything you need in order to gain a great in sight into how the business works and how it has maintained its success for over 75 years. This, coupled with all the timeless and well respected art and stories from the likes of Frank Miller, Alan Moore and Dave Gibbons’, makes this a must have and a must read for all interested in anything to do with DC.