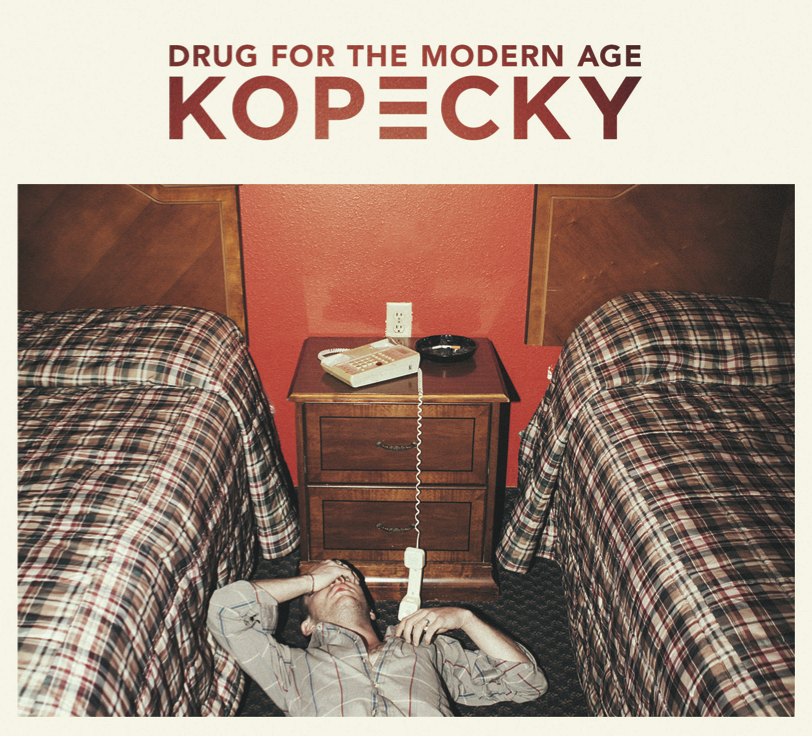 Kopecky – Drug For The Modern Age

Has song-writing lost its intelligence? According to some folks, it has. But thankfully, outside the world of mainstream pop and rock, there still exists music whose words are as thoughtful as the instrumentation they’re recorded alongside.

Kopecky, though condensed in name (formerly Kopecky Family Band) and a bit more pop in sound, are back with their second album ‘Drug For A Modern Age’.

The six piece from Tennessee may have swapped their folkish Americana for sun-drenched melodies, but while the tunes are foot-tappingly cheerful, a look at the lyrics finds an album that explores a range of human emotions and experiences. It seems like we live, love and mourn all in 12 songs.

It’s these sometimes simple but marvelously poignant words make this album shine. With their new pop turn, Kopecky have lost a bit of that unique, multi-instrumental sound that made their first album unique, yet it’s not a case of second album syndrome – they still sound robust and the vocals are just as enjoyable. It’s hard not to smile and feel loved-up when you hear male and female voices harmonising and playing off each other.

There’s sincerity in the song writing and delivery here too, even if the topics are sometimes cliché. The album’s first single, ‘Quarterback’ evokes images of high school puppy love. ‘My Love’ has a swirling, summer night’s romance feel to it. And if you were going to cheat on your partner, then ‘Thrill’ might be the one to convince that little voice in your head it’s a good idea. Likewise, the track ‘Burnin’’, with its refrain of “it’s bad for me” is the ideal quitter’s anthem. Music for all occasions.

The album’s final track and its namesake is the perfect close. It brings back the joys of the 2012 release with strings, keys and horns all making a balanced appearance. With the final lyrics ‘there’s a season we’re all going to die’ – it’s clear that music can still be honest, intelligent and thought-provoking in this modern age.