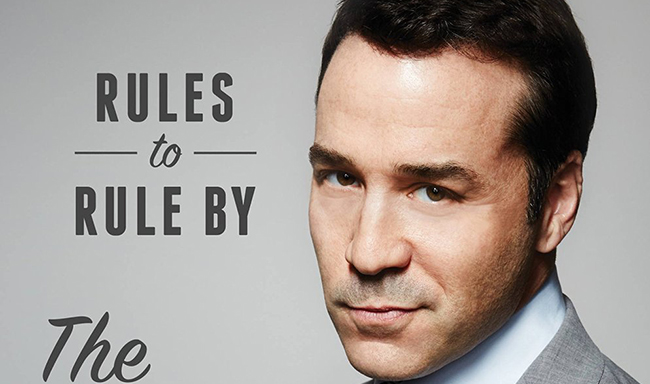 The Gold Standard – Rules To Rule By by Ari Gold is just as loud, in your face and bombastic as anything coming from the mind of this ubiquitous Hollywood agent should be.

Book shops (read: Amazon) have been littered with self-help/business motivation over recent years. Most of which are choc-full of airy-fairy, up to the minute buzzwords like mindfulness, self-love and all that other crap that is supposed to make you jump out of bed at 6am every morning shouting about how much you believe in yourself. The Gold Standard turns all of that on its head and demands you to get real and fast!

Putting aside the fact that Ari Gold is a fictional character for a minute, this book is actually excellently written and could honestly stand proud amongst the others that live in this genre at the moment.

Written perfectly in Ari’s tone of voice you can almost hear him telling the stories included in the book. It includes a number of anecdotes that any fan of the TV show would immediately recognise plus, a few more up to date and much more relevant stories (that may possibly feature in the upcoming film). Throughout the book Gold has a habit of comparing himself to huge, multi-million selling rapper/entrepreneurs like Jay-Z and as ridiculous as a middle aged Jewish man quoting rap lyrics seems in theory, in practice it works with his egotistical, egomaniacal personality.

The Gold Standard is a film tie in of the most gimmicky kind but you know what, it works. It’s fun and pretty easy to read. I particularly enjoyed some of the really badly photoshopped “personal photos” in the middle of the book (you know, those standard glossy pages in the centre of biographies and the such like). This is a must buy for any fan of Ari Gold, or just Entourage in general.