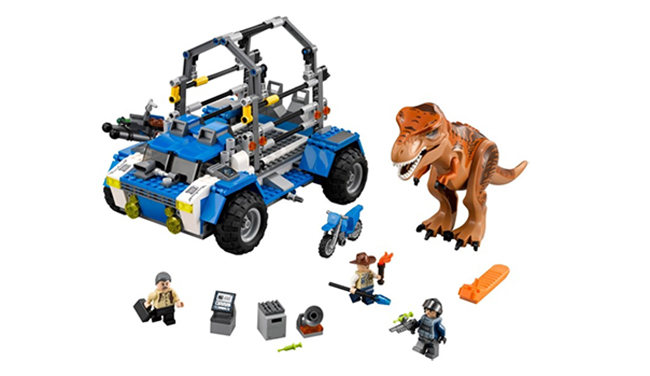 With the UK premiere of ‘Jurassic World’ this week, we thought it was a good idea to get a review of some of the associated Lego sets. We picked one of the smaller sets in the line-up: The Pteranodon Capture and one of the larger sets the T-Rex Tracker to give us a good overview of what the ‘Jurassic World’ sets were like.

Everybody knows that dinosaurs are cool and therefore it is no surprise that Lego as well has had several themes over the years incorporating dinosaurs. The latest before this year’s Jurassic World theme was the Dino theme from 2012. The dinosaurs in this line up were very nicely done and therefore it is no huge surprise that the Jurassic World line up does end up recycling the dinosaur figures, but also that the sets are very similar. Take for example The Tower Takedown (5883), T-Rex Hunter (5886) and the Triceratops Trapper (5885) sets and you pretty much have all the components of the sets under review here collected, minus the Jurassic World stickers and minifigures.

This does not however take away from the fact that the dinosaur figures are pretty much perfect for what they stand for. Both the Pteranodon and the T-Rex are very nicely detailed with opening mouths. The Pteranodon’s  wings can be freely moved and the T-Rex has movable legs, hands and head.

The minifigures are more difficult to review for a film that hasn’t yet been released.

Out of the two sets we get one figure each that correspond to the cast lists. Simon Masrani is the CEO and owner of the Jurassic World theme park and Hoskins is the head of security of the park. The Masrani figure is very nicely done with full body and legs printing of what appears to be a blue overall. The face is a scared look with stubble and big black hair piece. Hoskins is a plainer figure with no printing on legs, a shirt and a face with a grimace with a gray hair piece and some printed facial hair. The vet with his fedora hat seems like a more interesting figure with a very detailed printing on his body of a vest and an ID card. However, it’s not clear if he is actually a character in the film or just a filler figure in the set. Finally we get one ACU trooper in each set. Crucially the trooper in the T-Rex set is a female which will make many fans happy. I would assume the ACU are the security operations on the island, but it remains to be seen if the figures themselves relate in any way to characters in the films. As figures though, these two are my favourites. They are both very similar aside from their faces and come with printed legs and a printed vest piece that goes over their heads. They also have plain black helmets with a visor. The combat style vests with ACU printed on them look excellent and the whole overall look works well as well giving a good look of a private army of sorts.

The dinosaurs themselves are clearly the reason to buy the sets, but as we are looking at Lego, there has to be some sort of vehicles included as well to make it more of a set. This time, we get a small helicopter with the Pteranodon set and a large dinosaur moving machine with the T-Rex set.

The helicopter as expected is very straightforward as a build, but does create a surprisingly large vehicle nonetheless for a £20 set. The helicopter has some play features as well with a stud shooter cannon on a platform where one of the minifigures can stand and a large net cannon on the left hand side. The stud shooter side is nicely designed so that it can be folded into the helicopter’s body with the platform becoming the hatch. The net cannon is really just a tube where the net can be folded and which can be pushed with a simple mechanism from the rear. The net included is very rugged and will no doubt last a lot of play but the thickness does mean it is very hard to fit properly into the tube.

The dinosaur moving vehicle is very impressive and really looks the part of heavy machinery aside from perhaps the blue and white colour scheme.  The low down cab design reminds me of the trucks used to push the larger airplanes at airports. I particularly like the wheel arches around the massive wheels which really give a good impression of just how difficult it would be to move such a massive beast as the T-Rex. The cage at the rear is only held in place by gravity and doesn’t seem the safest of cages, but it is convincing enough for its purpose. The top of the cage has a simple locking mechanism that will do for the larger dinosaur like the T-Rex itself as long as the cage is not removed from the truck.  The play features included aside from the cage and the T-Rex itself are a large harpoon gun on the right side of the vehicle designed around the new style flick missile. I believe the harpoon style ammo piece for the missile spring launchers is a new design and it looks great. On the left you have an attached Lego motorcycle. This time the bike is rallycross/dirt bike style which fits the Jurassic Park theme well. Building wise, the truck due to its size is possibly an even simpler build than the helicopter. The cage does use technic pieces, but that’s about as far as any complexities go.

There is no getting away from the fact that if you are wanting to buy these sets, it will be because of the dinosaur figures, and they do not disappoint. The moulds and colours are crisp and there is enough movement in them to create whatever display you would like. If anything, they perhaps look too little like Lego figures. Both of them do have some studs on their back and underneath so they can be attached to bases and you can put a Lego figure to ride them if you like, but in the world that everything looks undeniably Lego, these dinos do perhaps look a little too lifelike. But this will not and should not bother most of the fans.

The vehicles themselves are a side show, a play feature of the dinosaurs themselves in some aspects. Like most modern Lego sets the helicopter and the transport vehicle are good designs but in themselves probably forgettable. If anything they both provide great bases for the kind of play Lego was designed for. So go ahead and convert the truck to a tank, a troop transport or even a flying vehicle. The helicopter perhaps has less conversion possibilities, but the modifications possible for exciting play are still aplenty.

It is hard to say at this point whether the minifigures will be important for the Jurassic World. It wouldn’t be too much of a leap to imagine we are really looking at the bad guys of the film. After all, corporate CEO and the head of security don’t generally end up being the heroes of the story. The ACU troopers are nice figures particularly if you get a number of them from across a few sets. (You get one trooper in each set).

If you are a fan of Lego and dinosaurs these sets are a sure bet. Children will also love the dinosaurs for their play whether it is with Lego City or Space sets. Obviously if you already bought the 2012 Dino sets, then there is a little less interest here for you. The colour schemes are a little different but the dinosaur moulds are exactly the same.

The film licence on the sets does inevitably add a little cost to the sets but all in all these are not too badly priced. And if the ‘Jurassic World’ film manages to ignite another dinosaur boom in children, these could well be some of the hottest toys come this Christmas. We shall wait and see!