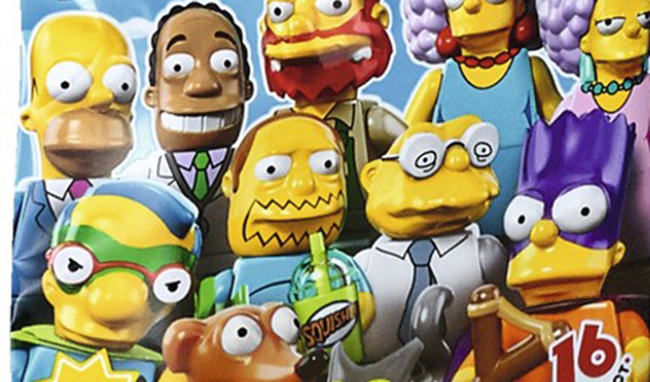 Sheet with pictures of all the minifigures in the series

Lego Simpsons was always a curious combination. On the surface there doesn’t seem to be many locations or vehicles that would naturally turn into Lego sets. Also, the Simpsons have a very unique look that didn’t seem to work well in the Lego minifigure format. However, the approach Lego has taken with Simpsons has so far worked really well. Firstly, we have received two large sets: The Simpsons House (71006) last year and Kwik-E-Mart (71016) this year. To accompany these sets we have the two minifigure collections which add a lot more characters to your Lego Springfield than could ever be included in a single set.

The minifigure design has also really benefited from the latest design improvements. This has allowed each character to have a unique rubberised head looking exactly like in the TV show with a normal Lego body and legs still making these unmistakably Simpsons yet also Lego minifigures.

The other major benefit of this style of product line up is that the price of entry for fans can be kept very low. At £2.50 for a single figure and availability in most supermarkets collecting the figures is very easy and the cost can be split over time. There is also a good availability of these figures from the reselling community, so once you are only missing one or two characters, it is very easy to go out and swap or buy the particular characters needed rather than buy lots more bags in the hope that you get the correct missing figure.

For review purposes 16 random bags were opened. As expected we weren’t lucky enough to get all 16 different figures, but all in all the spread was not too bad either. From the 16 bags we received 11 different minifigures with only Marge, Bart, Comic Book Guy, Patty and Edna missing. Without further mathematical analysis, this seems a pretty fair turn of luck. There doesn’t seem to be any ‘rare’ figures in the collection, so it should be fairly easy to complete the collection without spending huge amounts of money on duplicates as is often the case with these kinds of collectables.

As mentioned above, the minifigures really do look excellent. The head mouldings seem perfect and the look of each of the characters has been perfectly captured. The cartoon style of Simpsons also means that the detail on the bodies is easy to replicate in Lego form and therefore produces a lot more accurate looks than for example what you see in some Star Wars figures where Lego is trying to replicate a more realistic look.

Each of the character packs offers a unique minifigure not previously released. The more common characters such as Homer, Marge, Bart and Lisa come in different outfits, so for example Homer and Marge figures are dressed in their ‘Sunday Best’ rather than the more common look that has already appeared in the two sets released. Maggie and Lisa figures also come with Santa’s Little Helper (the dog) and Snow Ball II (the cat). Maggie figure is the only one that looks to be the same as the figure in the Simpsons House set, although I haven’t been able to compare the two figures side by side to confirm this. In any case, even if this will provide a duplicate you can still get Santa’s Little Helper with Maggie which is a new figure.

The other Springfield characters included appear in their traditional looks and therefore let Simpsons fans get their hands on more of these well known characters.

For fans of Simpsons these minifigures are a great little series to collect. Of course any sealed collectable sets are going to come under some criticism for the inevitable duplicates etc, but in many ways that really is the point of collecting something. If you could just go into a shop and buy them all straight away, there would be very little sense of satisfaction for the collection. In addition the series is relatively small with only 16 different figures, so the chances of picking that desired figure are not that low either.

Lego has done its usual great job with making sure the minifigures not only look great, but also still retain the quintessential Lego look. The moulding of the character heads and the overall quality of the figures is exceptional and there is never any question of who the figures represent.

If there is any questionable aspect to the collection, it probably would be the timing. The Simpsons has been on TV since 1989 and if anything is now in decline and quite possibly finally approaching its end. Had these sets and figures been available even 10 years ago this would have been a massive success. Now, the Simpsons is mainly going to be appealing to long time fans of the series who still haven’t forgotten about it. There is a lot of nostalgia seeing these great little minifigures and they are fun. Whether they are going to be able to find any new audience remains another question. Having said that, the larger Simpsons sets seem to have been a great success to Lego, so there is a good chance that anyone who has bought into these will want to collect the minifigure sets as well.