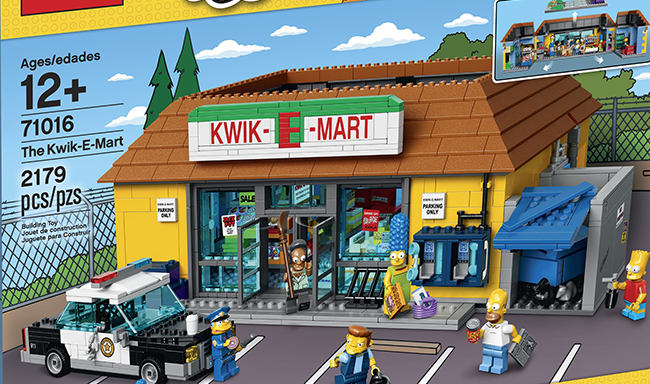 16 numbered bags of Lego bricks + One without a number

The Kwik-E-Mart is the second of the two large sets released in conjunction with the two series of Simpsons collectable minifigures. The Springfield local shop run by Apu is certainly a location worthwhile of capturing as so many of the classic Simpsons moments have happened there. Unsurprisingly, the Kwik-E-Mart set has many subtle and not so subtle references to these episodes in the form of posters and other recognisable props. While the exterior is relatively faithful to the likeness  in the TV show it really is the interior of the shop that offers most of the build with its stacked freezer and normal shelves, fast food stations, drinks machines, cash machine and arcade games machines.

The minifigure selection is perhaps the only section where the set is a slight let down. While the figures are certainly of the usual great quality, only Snake is truly a new minifigure with all other characters having already appeared in either the Simpsons house or as a collectable figure. Homer  and Marge are exactly the same as in the other sets, and the changes in the other characters are fairly subtle. Chief Wiggum is the same as in Series 1 figures except for some doughnut splatters on his uniform, Apu was also in Series 1 but this time appears in his clerk  uniform which is arguably the rarer look for him in the series and Bart is the same figure as in Series 1 and the Simpsons House except without eyelids or a slingshot in his back pocket. Snake Jailbird is very nicely created with a tattoo on his arm as well as the customary new head mold which is as accurate as you would like. The minifigure line up does mean that the set stands very well by itself which of course is a positive, but in a series heavily leaning on the figures and which has really been built around collecting, it would have been nice to get at least one more truly unique figure.

The build of the set is what probably sets this set apart from most Lego in that it is truly great fun to put together. Obviously filling the shelves with tiny consumables is fiddly and requires a lot of patience but the build acts as a discovery to all the great jokes and details that the set has to offer. You never end up doing a boring part for long before moving on to the next section and discovering another nod to past episodes of the show.

Normally if a set had over 50 stickers included this would definitely be a negative, but in this case it is understandable and also a source of lot of the jokes and references. None of the stickers are difficult to place and I don’t think there are any which span over several pieces which is a common bugbear for Lego fans. The number of stickers also hides the fact that there are lots of uniquely printed pieces and more which have been borrowed from other sets like the Parisian Restaurant (10243).

The build starts with Chief Wiggum’s police cruiser which is a good likeness to a typical US police car. The car is nicely designed with a low profile that looks realistic but then suffers from the fact that the interior has had to be made a little too high to fit a minifigure inside. Ultimately though, this just gives the car a nice cartoony look which fits the set very well even if it doesn’t really add much to the whole.

The Kwik-E-Mart itself has been designed as a nice combination of a ‘dolls house’ design and the layered approach used in the Lego modular series. This means that the roof and the hidden garden underneath can be lifted off the set and the back can be opened on hinges. This gives lots of access to the interior to be able to appreciate the detail inside while still being able to display the set as a complete exterior.

As mentioned above, the set does a good of adding variability to the build jumping from the interior to exterior. This means that you could do one layer of the wall, followed by one of the freezers and then moving on to the excellently designed payphone bank outside. The amount of detail inside means that this can be continued all through the set after the base layer has been set up.

The build also is surprisingly long even for a set of this size partly due to the many details and small pieces involved and partly due to the fact that each section completed reveals more references to the show and therefore there is never a desire to rush through the build.

As someone who builds lots of cool Lego sets large and small, it is hard to overstate just how refreshing the build is compared to most. The set is not especially complicated at any point but there are some great small designs in unexpected places and the overall look is very colourful and pleasing to the eye. Having said that, as the age recommendation of 12+ suggests, this set is not one for the smallest of builders. The amount of fairly fragile designs and small pieces does mean that you have to have a steady hand and plenty of patience to complete it all. What the set does lend itself to very well though is building as a joint project for the family with different sections requiring varying amounts of care.

Clearly the set is aimed at fans of Simpsons but this set can definitely be recommended to any fans of large Lego sets. Anybody building this set can enjoy the references to this ‘inconvenient convenience store’ with lots of jokes that do not require any knowledge of the series.

In detail this compares very well to the more adult oriented sets like the modular series of buildings and could easily be added to any Lego City style display as the local convenience store.

The detail and design with great access to the interior also offers lots of play opportunity as long as the user is not too rough with the detailed interior.

The minifigure selection is perhaps a little let down to the set, at least if you have been purchasing the previous collectable figures. Having said that, there are three new variations of characters and one completely new figure for collectors, so it’s not all bad news on this front either. If this is your first foray into Simpsons Lego however, the set does give many of the essential characters that appeal to fans.

As a display piece I’m in two minds about it. The exterior, while faithful to the original, is still pretty plain and the fun really is in the details which require a lot of handling to access and close viewing. Therefore the set doesn’t really stand out the way a large Star Wars ship or perhaps the Batmobile would. Perhaps the best use for the set as a display piece would be as a backdrop for all the collected Simpsons minifigures.

For fans of the TV show the set does give references to countless Simpsons episodes and it is clear that the design has had a lot of input from someone who really knows and loves their Simpsons. It’s a little disappointing though perhaps understandable that there are no references to Duff Beer in the set which in the show features so heavily in the shop. This also presumably means that there will never be a Moe’s Bar set which would have been another great location to add to the Lego series. It remains to be seen if there are any further locations which could be produced as fun Lego sets in the future. I would certainly hope so, as the Simpsons House and the Kwik-E-Mart have really surprised me in their overall quality.

Overall then the Simpsons Kwik-E-Mart is great fun and the build itself is enough to recommend anyone to go and buy it!