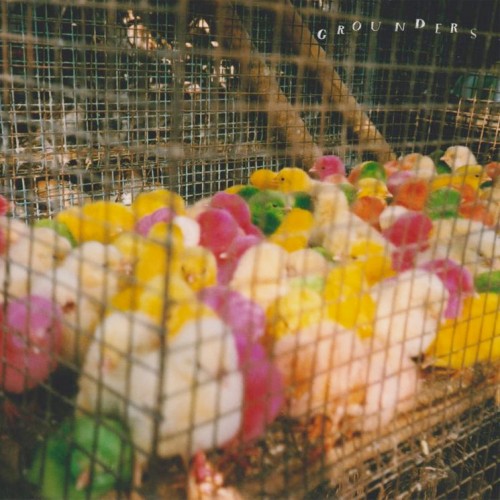 Open any newspaper and you’ll be reminded how grim the world can be. Enter, the ever-popular genre of blissed-out, chilled-out psych-rock. If only more world leaders were into kicking back with a beer and a record. Thankfully, plenty of us are.

Grounders, a four-piece from Toronto, are the latest band to offer us their take on this familiar sound. Their self-titled debut is perfectly timed – summer is here, school is out and everyone just wants to have a good time.

Sure, it’s that now ubiquitous pop-infused ‘krautrock renaissance’ music: warm and dreamy with the right touch of electronica. What makes this album stand out is its consistency. There’s no focus on a single catchy hook. Instead, everything is weaved into one. Each euphoric song blur into a fluid steam of audio consciousness in a way that is almost meditative. Hence, it comes as no surprise to hear that vocalist/guitarist Andrew Davis has in an interest in practice of meditation. The pace may subtly pick up and slow down here and there, but all in all, you’re just left in a daze of happiness.

‘Face Blind’ and ‘Bloor Street and Pressure’ stand out as the more electronic tracks, yet still blend in seamlessly with the rest of the album. The vocals are soft and sparse to the point it’s hard to comprehend what the songs are about. Lyrically, ‘Vyvanse’ is the only stand out with its beautiful descriptions: “Laying down in the night, drifting out / Having fun thinking, his head’s gone round / Something’s moving from his eyes / Rolling off the floor, tongue gets tried.”

Yes kids, it’s the song about the ADHD drug.

Opening track, ‘Secret Friend’ asks us “where do you go from here?” And where do we go from a genre that is becoming ever so ubiquitous? Perhaps when the political landscape of the world is less bleak, we’ll no longer need the escapism of woozy, dreamy psych. Until that happens, let’s enjoy the sunshine and chill the heck out.