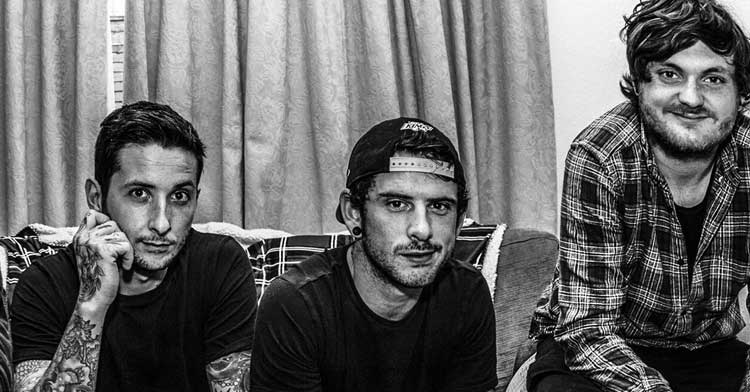 A Quick Chat With: Midday Committee

Portsmouth trio Midday Committee recently went to The Netherlands to play at Jera On Air Festival alongside a line-up including A Day To Remember and Enter Shikari, and have also shared stages with Neck Deep, Transit, Decade and many more in the past. Glasswerk writer Iqra Choudhry got cosy with the band to find out more following the release of their latest single ‘She Gets Me’ last month.

Hi guys thanks for talking to us! If you had to describe your sound to someone who’s never listened to you, how would you describe it?

Music so happy Pharell went and wrote a song about it.

You released a video to ‘She Gets Me’ a few weeks back – what’s the response to it been like?

The response has been amazing, it’s so great to hear people like the direction that we’re heading.

Are you going to be releasing an EP or a full-length soon? What can we expect from you guys?

Definitely. We’ve got the material, and we want to keep the ball rolling. Maybe a cheeky ol’ full length/mini album is definitely in order soon.

You’ve just done a few shows this July in Brighton and Frome – how did they go?

Brighton was a good show, played with some awesome bands there. Our friends Six Time Champion definitely put on a great show. We always enjoy Frome, our good friend Rob (Hit or Miss) always puts on a great gig and treats us well. It was actually The Hoosiers afterparty, so it was cool to see them play and there were a fair few people to watch us too.

You guys are about to head out on tour with The Gospel Youth and Bad Ideas – how stoked are you?

You’ve played shows with bands like Neck Deep and Transit before – which band have been the best to tour with to date?

We always hold a special place in our heart for the bands we tour with! But the lads in We Are Carnivores we definitely miss the most, they’re more or less replicas of us but with loads more facial hair. So fun to tour with, could happily get jiggy with them everyday.

Which bands would you love to tour with someday?

I think the Boston Manor boys would be a good one, and overdue too. They’re great and so easy to get along with.

Do you ever get involved with tour pranks?

The first band we ever toured with, the guitarist made the mistake of falling asleep in the van, so we covered his face with ham.. but then we remembered the dude was a vegetarian which is definitely pretty bad.

What are the best and worst shows you’ve ever played?

Our best was Jera On Air. We’d do it a hundred times over. Worst was a rugby club in Gosport, the rugby team were there, trying to watch a game in the back of the venue.

What was the first show you got paid to play as a band?

I honestly can’t remember! That would have been a while ago now.

Who was the first artist/band you saw live?

First show ever for me was Bowling For Soup at the Southampton Guildhall, so the opening act was MC Lars. Not even sorry! 😉

What are you listening to at the moment?

The Gospel Youth all day, errrday. Their newest release is the soundtrack to my life right now.