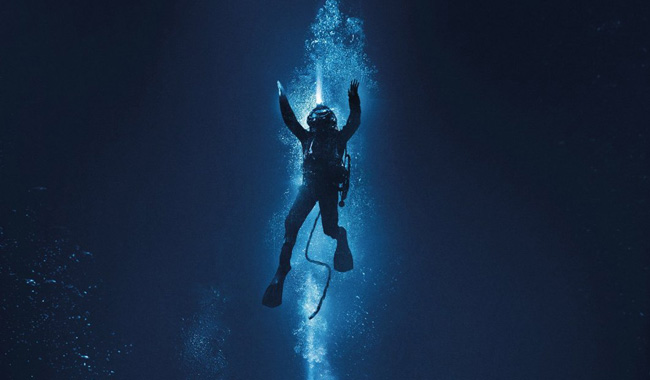 Somewhere in the Indian Ocean, a ship is heading into a storm. On board are four deep sea saturation divers about to be lowered to the bottom of the sea in a diving bell. Two of them – Hurst (Alan McKenna) and Engel (Danny Huston) – don’t get on. The youngest – Jones (Joe Cole) – does not yet have any actual deep sea diving experience. What could possibly go wrong?

The short answer is also the obvious one: absolutely everything. Which pretty much sums up the film’s main weakness: Pressure’s 91 minutes are just a little too stuffed with worst-case scenarios and thwarted plans to be entirely plausible. The film’s main premise is the stuff of nightmares: the four men are left stranded 650ft at the bottom of the ocean with the air in their bodies compressed to withstand the depth so that resurfacing too quickly means certain death. Director Ron Scalpello certainly loses no time and cuts right to the chase. Disaster happens about ten minutes into the film and it is pretty much constant suspense from then on in. This is one of Pressure’s greatest strengths: it will have viewers biting their nails from start to finish. Actor Danny Huston points out in an interview included in the DVD extras that the events in the film leave the characters little room for over-contemplation. Huston is right and this goes for the audience as much as the characters which is probably just as well. The suspense may stop audiences from realising just how weak and bog-standard the script (by Louis Baxter, Alan McKenna and Paul Staheli) and characters are.

That being said, the actors deliver superb performances, the abundance of close-ups requiring some very precise and understated acting. Cinematography is another of the film’s strong points: intimate shots in tight frames which are often further constrained by frames-within-the-frame craftily convey the feeling of claustrophobia that comes with being stuck in a tiny vessel at the bottom of the ocean. A lot of it is very sparsely lit with the lamps on the bell itself providing the key light for the exterior underwater shots (filmed on Pinewood’s underwater stage). Pressure relies on a rather minimalistic soundtrack. It is only in some of the more hectic scenes or flashbacks that music serves to underline the mood.

At its best, the film plays upon elementary fears of death, darkness and isolation, touching the viewer on a very visceral level. Although never thoroughly enough, it explores what goes through people’s minds when they are confronted with the realisation of their almost certain death. It also holds some truly shocking surprises.

Sadly, while the film manages to escape some of the inevitable clichés that perhaps come with a psychological thriller of this kind in the first half, later it serves too many of them. As a consequence, it becomes a bit ludicrous. And by the time the pay-offs to some of the earliest set-ups happen, the over-reliance on standard plot twists may have caused the film to lose the viewer. Ultimately, Ron Scalpello’s second feature film fails to truly impress.

As to the DVD extras, the approximately eight-minute behind the scenes lends some interesting insights into the production process and brings across the dedication of the film’s crew and the achievements of the actors’ performances. It is supplemented by interviews with director Ron Scalpello and actors Matthew Goode, Joe Cole, and Danny Huston. It is a little puzzling that Alan McKenna as both performer and writer gets no say here.  Like the film, the extras are far from overwhelming. All in all, this disc may be worth renting rather than buying.