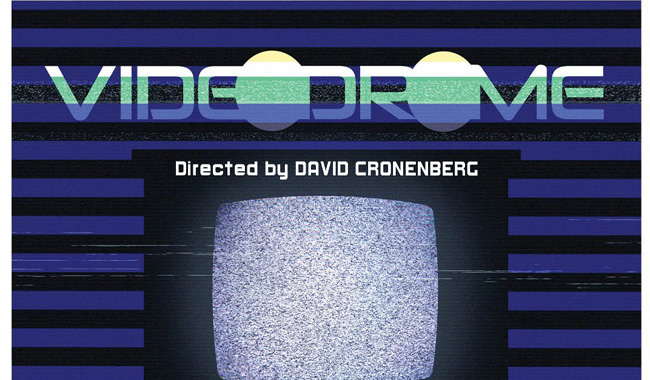 Continuing with their (hopefully) ongoing high definition presentations of David Cronenberg’s early works, Arrow Video have pulled out all the stops with their latest instalment: Videodrome. Boasting some gorgeous packaging adorned with bespoke illustrations by Gilles Vranckx and a comprehensive assortment of special features – even more so on the Limited Edition version (more on that later) – it would appear that we have the most definitive Blu-ray release of Videodrome yet. Following on from Arrow’s two previous Cronenberg releases; Shivers (1975) and Rabid (1977) it’s worth noting that they have jumped ahead in Cronenberg’s directorial chronology, omitting Fast Company (1979), The Brood (1979) and Scanners (1981). In the case of Scanners and The Brood this is likely owing to the fact that both have already had a UK Blu-ray release on Second Sight. I am however surprised that we have yet to see a UK high definition release of Fast Company. Perhaps that’s coming at a future date. *Wink wink.

Videodrome is considered by many to be the apex of Cronenberg’s filmography and was certainly his most complex and mature work to date, both in terms of narrative and concept. The story focusses on Max Renn, played by James Woods, the owner of a cable TV station known for its controversial and subversive material. Upon haphazardly intercepting a pirate broadcast of a shocking programme entitled ‘Videodrome’ he embarks on a search for the show’s origin. Whilst his efforts initially appear to be successful his journey soon becomes increasingly psychological through a series of bizarre hallucinations and quickly descends into a game of cat and mouse with a shadowy, sadistic organisation.

As pointed out by another Filmwerk contributor on his review of Rabid earlier this year Cronenberg’s early career was almost exclusively limited to low budget horror movies; including Videodrome, and would remain so until his breakout hit ‘The Fly’ (1986). With that in mind it is always with an attempted judiciousness that I critique the quality of such a restoration as this. Videodrome was made on a budget of around five million dollars and it’s quite clear that the lion’s share would have gone on production costs given that the film employs the special practical effects wizardry of Oscar winning artist Rick Baker.

With that said the original picture was surprisingly effective, no doubt owing in no small part to cinematographer Mark Irwin’s simple but highly effective use of lighting throughout. I’d also add that the reproduced image quality on the earlier mediums of VHS and DVD never particularly bothered me as I personally felt that the grainier, more washed out appearance that those formats are plagued with suited the film on a stylistic level. However, I was literally in awe of the picture quality on display here simply for the depth of colour that is afforded in high definition. Particularly stand out scenes are the ones that depict a ‘through the eyes’ view of what Max sees whilst wearing the ‘Accumulator’; a sort of night-vision style headset through which the film makers depicted the visual experience with an array of digitised video effects that were no doubt cutting edge in 1983, and the infamous sequence in which Max thrashes a television with a whip whilst the screen displays his love interest, Nikki Brand (Deborah Harry) reacting to it as though she was actually there.

What I’m not clear on however is if this restoration is a brand new, exclusive high definition transfer for the Arrow release or if it is a reproduction of the transfer seen on the Criterion release for Region A.

Audio-wise the restoration contains only the original mono track, albeit completely uncompressed but I found it hard to tell if there had been any additional restorative post production. It’s a pity we didn’t get a stereo re-master if only for Howard Shore’s excellent original score but I imagine, however unfortunate, that the budget for a disc such as this was already stretched by the time it came to the audio track.

Audio Commentary by Tim Lucas, the onset correspondent for ‘Cinefantastique Magazine’ and author of ‘Videodrome: Studies in the Horror Film’ – Although unfortunately not a commentary from the man himself, Tim Lucas provides a clearly informed outside perspective on the film that would otherwise be possibly lacking on a crew-only commentary.

‘David Cronenberg and the Cinema of the Extreme’ – A decent 20 minute documentary, originally aired on the BBC in 1997 featuring interviews with George A. Romero, Alex Cox and David Cronenberg on Cronenberg’s early career, censorship in movies and the horror genre in general. It contains some wonderful comments from Cronenberg on his narrative motivations and some of the meaning behind his body distortion imagery.

‘Videoblivion’ – A brand new, 2015 Arrow Video exclusive interview with cinematographer Mark Irwin in which he details his own film career prior to meeting Cronenberg and talks candidly and extensively on the filming of Videodrome. Lots of information and a necessary up to date retrospective for long-time fans of the movie.

A brand new, 2015 Arrow Video exclusive interview with producer Pierre David in which he recalls the casting process and professionalism of the crew and scheduling but laments somewhat over the films poor box office performance.

‘Fear on Film’ – A brilliant 1982 panel style interview with David Cronenberg, John Carpenter and John Landis on the horror genre, censorship and their respective movie careers to date. Whilst this interview is unfortunately over all too quickly it’s like cocaine for a horror fan as Carpenter is at the time working on The Thing (1982), Cronenberg on Videodrome and Landis has just come off of An American Werewolf in London (1981).

In addition to these special features, an exclusive limited edition version of the release includes an extra disc featuring high definition and standard definition restorations of 4 of Cronenberg’s earliest amateur films: Transfer (1966), From the Drain (1967), Stereo (1969) and Crimes of the Future (1970) as well as an interview with author and critic Kim Newman discussing these films. Unfortunately this disc was absent from my review copy.

Despite its poor original commercial performance, Videodrome has gone on to become a true cult hit and is absolutely essential viewing for anyone who has an interest in David Cronenberg, even more so than the oft-touted ‘Scanners’. Whilst it’s true that Cronenberg will later revisit similar themes and imagery; particularly in the commercially successful ‘The Fly’ and ‘eXistenZ’ (1999), Videodrome exemplifies the use of his trademark grotesque body transformations and is the most successful culmination of his unique, visceral brand of horror and trippy twisting narrative that we will likely ever see.

With this Blu-ray release, Arrow Video have crafted a love song to diehard fans of the movie – especially in the case of the Limited Edition – with a four disc set that covers all the desired bases and delivers on all fronts. It should be obvious by now that I include myself under the description of ‘die-hard fan’ and so it’s very easy for myself to give both the movie and this latest presentation by Arrow Video an easy five stars. Horror fans and appreciators of the more ‘bizarre’ flavour of film will also find something of value here but newcomers should approach with some trepidation as Videodrome always has divided audiences.