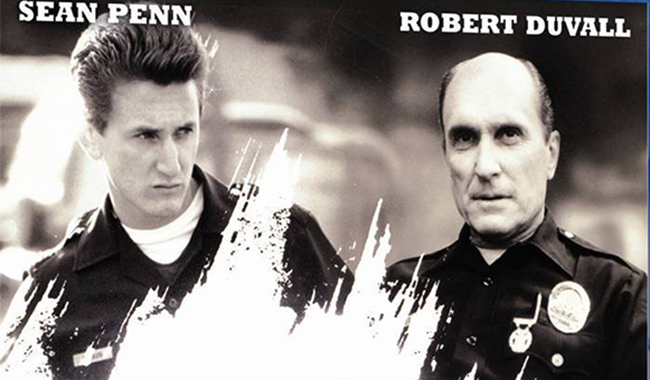 Colors is a film that hasn’t aged well to the style of filming, fashion and music used, it is still decent film that stands out amongst Dennis Hopper’s collective of films he directed, despite the 27 years the story of gangster/gang problems in Los Anglos in the 80’s still matter now, because socially, the problems of gang culture still exist. With recent films like Straight Out If Compton, films like New Jack City and Boyz N The Hood have gained re-interest from new audience because of timing and occurrences recently in America.

The Blu-ray release of Colors is interesting but very basic, the look and the film on the blu-ray format does give the film a fresh feel but still because its natural datedness is not as decent as it could have been, though there was little to done to change this.

One wonderful thing that stands out of the Colors blu-ray is that seeing how young a Sean Penn and how Hopper managed to make Penn less grating then he could have been, the natural cockiness of the character compare to the confident, relaxed Robert Duvall is interesting to watch.

Colors could be watched and enjoyed by new audiences, despite the pace of the film, despite the predictable cliches that happen in most dated films (which is unfair because films like Colors started such cliches in gang warfare films) and despite the un-likability of some of the characters, it’s a well crafted film, that uses the streets and back-drop of LA and South Central very well, it’s a film where you see more realism then most films, the scenes in the back-streets where the gang violences occur (again, was more an impact visually 27 years ago to watch) do look realistic and believable.

Though the film is set around The LAPD and the gang culture (between the Bloods and The Crips, both real life well known gangs in LA), its essential film around the character played by Penn and Duvall, who though good-cop and bad-cop in their approach to the residents (gang members or otherwise) of the area they circulate, Duvall being put back on patrol unit of C.R.A.S.H with a new rookie partner, played by Penn.

As the films name implies, it is about colours but colour is what is used by the different gangs to identify each other and colours used by the Police to identify themselves, the film addresses the problems in society and its closed approach to people, how the lack of equality and social injustice is standardised thing within the police force and within their community where gang culture is.

Hopper made this film 18 years after Easy Rider and though these two films couldn’t be further apart in themselves, the element of companionship and loyalty are the same.

Watching Colors there is an element to how Hopper himself did some wonderful scenes between Duvall and Penn but when it came to Hopper doing scenes with woman, the love interest for Penn’s character, could have been more interesting developments but like most female within the film and they’re there to look pretty and say very little.

Watchability-wise Colors does take getting used to, the Hispanic and African American gang member are cliched but collective cast are very quite well preformed and have believability.

One of the best things about Colors is the soundtrack from Ice T, Salt-n-Pepa and Rick James, which helped make the film more successful, produced by some heavyweight producer of the 80’s hip-hop scene the Colors film and soundtrack worked incredibly well together, one the few times both have been equally as good as each other.

Though not a film that is without flaws, it’s is well intended and was made at a time when different aspects of story-telling and film making were coming together, more of a social conscious and more raw aspects of showing it style-wise.