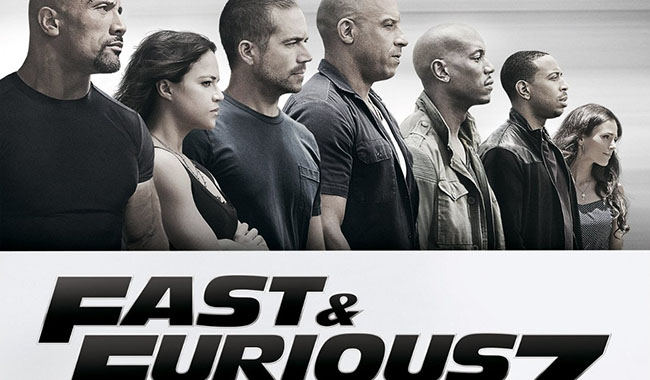 Well there is no disputing the popularity of this series now that this film was the first in that series to break (or should that be “smash through”) the billion dollar mark at the box office.  Not only that but it is now in the top 5 of highest grossing films of all time. How?

Well since the fifth film the series took things to another level, the series has been all about big budget summer blockbuster action thrills.

This time round Dominic Torretto (Vin Diesel) and his gang have their hands full thanks to the revenge seeking brother of the guy they took care of in film six. Jason Statham announced his presence at the end of that film and here he pops up all over the place to stick the thorn in the side of Dom’s team

But on top of this they also have a new master to serve (enter Kurt Russell’s government official) who wants them to do a bit of fancy globe-trotting in order to steal a piece of hardware. This then puts them up against another team of artillery heavy goons with which to do battle.  It all adds up to well over two hours of insane stunts, action, one liners and general chaos.

But we don’t forget about the people much as all the returning cast have their own little pieces of business to take care of along the way. Brian and Mia are looking at settling down, Dom and Letti are working on restoring Letti’s life after it was taken from her (as well as her memory) in previous films. Roman and Tej are still trying to man up against each other – not least to impress a new female member of the team they encounter along the way.

They also encounter the likes of Djimon Housou, Ronda Rousey, Tony Jaa as well to knock up against as well as Statham.

So there is plenty of bang for the buck here, but with so many characters and so many threads to tie together it is a wonder how they made it half as coherent as it is. In all honesty everything is stretched a bit thin and this seventh film is clearly showing signs that longer and fatter does not make for the best experience. F&F7 is fun by all means, but it is starting to waste its opportunities. Here the plot should simply have focussed on the revenge/Statham aspect. Instead he is far too often sidelined and come the climax – we are cutting away so often from the showdown he has that you care much less about how it is going to resolve. It’s also clear that if Statham were to be more central that they would have no excuse other than to off a few members of the team if he was to have any impact. As this is clearly not what the producers have in mind for their “ongoing” series, and with the tragic passing of Paul Walker during production, instead they have focussed the plot elsewhere and instead have Statham cameo in each major scene to shake things up a bit.

The franchise has gotten a little bit precious with their characters that you don’t really worry too much about anyone’s safety in this film. It seems almost ironic to say that in a film full of such daredevil stunt work that the material is playing it very safe with its characters. Maybe in future for the next film (to be set in New York – Can’t wait to see them drift through Times Square without knocking anyone down) that they need to have a more condensed and focussed story and learn to take risks.

On the Blu-ray extras there are a few deleted scenes, a half hour guide through the film with some of the key cast and the director James Wan. This is as close as you get to a commentary. And then there are various short featurettes focussing on the fights, the showcase stunts and the series itself. They all fall between the 5 to 15 minute mark and are often loaded with clips and general promotional back slapping guff.

For anyone who as enjoyed the new direction of the franchise – this one will entertain, but the cracks are already starting to show.