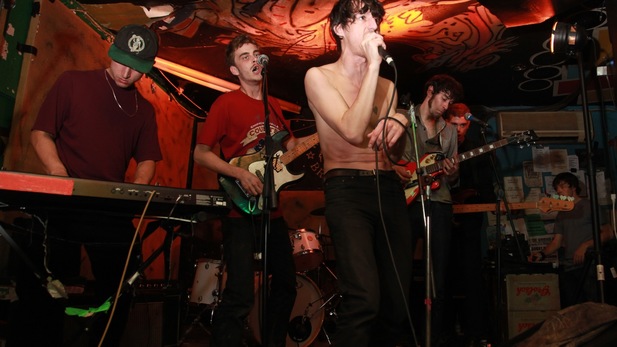 “Ian Duncan Smith, what a cunt.”

The opening (factual) statement from The Moonlandingz frontman ‘Johnny Rocket’ was met with wild enthusiasm from all present at Glasgow’s Broadcast and established an instant love affair between said singer and the crowd. It set the tone for the rest of the gig, the first of a short UK tour for the allegedly fictional Moonlandingz ensemble.

Comprising of members from The Fat White Family and The Eccentronic Research Council, on this occasion, Moonlandingz appeared together in the flesh with a mystery (at times mystified-looking) female bassist. While everyone in the room seemed to completely lose the plot, she had the look of a girl who had just been placed on stage, handed an instrument, told to play and ask questions later. It was fascinating to watch.

‘Johnny Rocket’, better known from his day job with the best band on the planet (Fat White Family, FYI), Lias Saoudi divided his show time evenly between losing all control on stage and throwing himself off it. Thankfully, time and time again the baying mob in front were willing to break the fall. A particular highlight of Saoudi’s actions came when he emptied the remains of his Buckfast bottle on top of a few folk. Unsurprisingly, they were happy to receive what seemed like an alcoholic baptism.

Undoubtedly formidable if seemingly psychotic, Saoudi brings to Moonlandingz the kind of snarling nihilistic mayhem which makes the Fat Whites so exciting to watch and listen to. The ‘supergroup’ played a rousing set in perfectly intimate surroundings which was chock full of atmosphere, sounding just as good live as they do on record. The electronica of ‘Man in Me Lyfe’ and ‘Sweet Saturn Mine’ needed no introduction and had the place in complete raptures before tunes were in full flow.

Before starting up for ‘Lay Yer Head Down In The Road’, Lias requested the crowd sit on the floor, for a few minutes turning the room into a kind of perverse Jesus Camp. Indeed, momentarily the song itself became a kind of ‘Kumbaya My Lord’ for the drunk and mentally deranged – like I said, it was fascinating to watch. Yep, they fucking killed it.