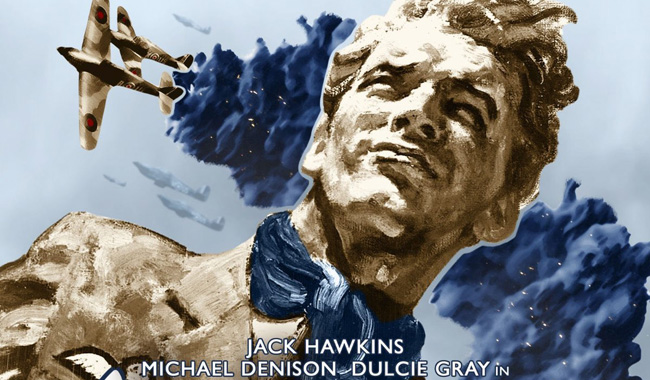 Tally-ho and chocks away. 1952’s Angels One Five was one of the first of the decade’s great and classic war films that emerged from Britain. After World War II the nation had grown tired of war and war films but also became bored by peace. The only films that dealt with war in Britain in the years immediately after the war largely dealt with the social problems or about servicemen adjusting to civvie life. During the war itself there had been some truly classic and great films such as In Which We Serve (1942), The Way Ahead (1944) and The Way to the Stars (1945) (all of which dealt with each of the armed services – navy, army and RAF respectively). Of course they were propaganda films designed to galvanise the nation but they were also films about courage, fortitude and English stoicism. All these things came to mean for many the identity of Britishness (and I do mean British rather than English as there were always Scottish and Welsh characters in these films and often a Canadian or Australasian), the stiff upper lip and all that emotional tragedy can be overcome with a cup of tea.

Angels One Five was the first of many war films, nearly always in black and white and commonly starred such actors as Jack Hawkins, John Mills or Richard Attenborough who came to define the English character. Later films included The Cruel Sea (1952), The Colditz Story (1955), Ice Cold in Alex, the dark Dunkirk (both 1958) and most importantly The Dam Busters (1955). The similarity between The Dam Busters and Angels One Five apart from focussing on the RAF are the famously rousing scores that open both films. The score which opens Angels One Five was by John Wooldridge and sets the historical scene that preceded The Battle of Britain showing the German’s attempts at bombing the merchant navy and strangling the UK. Also edited into the opening montage are the radio towers that Britain so relied on with their early warning of the German Luftwaffe and most symbolically Hurricanes flying over the White Cliffs of Dover. It is June 1940 and France has fallen. The first establishing scenes of the film are showing a squadron in Neethley scrambling to engage with the Luftwaffe over the Kent countryside. The focus, as it is in most of the films action is not in the air but in the operations room where we see Michael Denison and the films main star, Jack Hawkins as Group Captain ‘Tiger’ Small. The only real engagement is in the films finale. The story, such as it centres on a young Scottish medical student, Pilot Officer ‘Septic’ Baird (John Gregson) who’s life at the squadron doesn’t start well when he crashes a much needed Hurricane into a house due to a mechanical error. Because he is an inexperienced pilot he is grounded and consigned to the ops room. This sets him against many of the Squadron commanders. Desperate to fly, his desire for action is not met until later in the film when he is able to prove himself.

For those who don’t like to hear the old fashioned Queen’s English spoken or those partial to British emotional restraint may not like the film. Denison’s character as Squadron Leader Moon is a perfect example of this. As is the case with Cyril Raymond, the Squadron Leader who’s house Gregson crashes into comes out to survey the damage and says “dropped in for tea old boy?” Central to all these characters is Hawkins as the Group Leader who holds the base together. There is emotion bubbling under the surface of his character as he has responsibility for the base, chastises a mechanic (played by token working-class actor Harold Goodwin), the same for ‘Septic’ Baird on several occasions and deals with the loss of pilots. Later in the film he admits his loss of control as he takes over a Lewis gun as the Luftwaffe bomb the base. This character Hawkins would perfect and develop in his next war film, The Cruel Sea. Of course Angels One Five can be criticised for the RAF being 100% British and pays no homage to any of the Polish, Czech, Canadian or other Commonwealth pilots who took part in the Battle of Britain. This aside it is still one of the great films and would have been a very fresh memory to those who took part and remember the war.

Released by Studiocanal, the image has been cleaned and restored with one of the extras on the disc clearly showing the comparisons and they are indeed quite impressive. Other than the trailer, the one other extra is a minute talk by historian Max Arthur who gives some background context to the film and its historical accuracy.