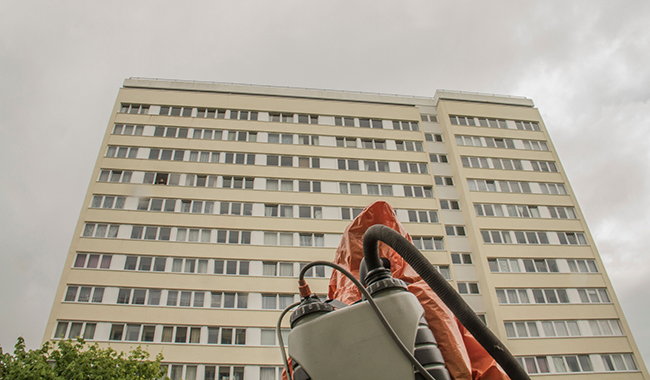 It’s important to cherish the little things. Sometimes the brightest gems pass through cinemas with far less attention than they deserve. David Robert Mitchell’s It Follows, my favourite film of 2015 so far, suffered this fate. My hope is that Neil McEnery-West’s captivating psychological thriller Containment fares better.

Several neighbours awaken to discover their block of flats have been locked down by anonymous figures in hazmat suits. Sealed inside their homes without water, electricity or any real explanation, they must work together to unravel what’s happening as the world unravels around them.

Containment is striking for many reasons. A pervasive sense of desolation and tension is created and maintained from the very first shot. Exquisite sound design ratchets this up while throwing in disorientating, almost dreamlike overtones. The film looks fantastic; balancing stark, mundane visuals with increasingly pronounced colours and lighting as the captive’s longest night wears on.

As an ensemble piece, Containment benefits from fleshed out characters carried by great performances. Mark (Lee Ross) is our linchpin: artist and estranged father, wearied yet likeable and the perfect foil to Andrew Leung’s violent and impulsive Sergei. Sherlock’s Louise Brealey is perfect as the anxious yet proactive nurse Sally, who’s disgust for her whining, duplicitous partner Aiden (William Postlethwaite) becomes nigh on palpable.

Everything about this film is handled deftly. The situation is desperate but not overwhelmingly so. Nerves are frayed without resorting to jump scares or hysteria. The character’s morals and beliefs are tested, but not discarded at the drop of a hat.

The film’s pay off may divide audience opinion. Personally I loved the subtle daring of McEnery-West and writer David Lemon’s cautiously optimistic ending. What’s encouraging is that it opens the way for a potential sequel; which I would willingly be exposed to.