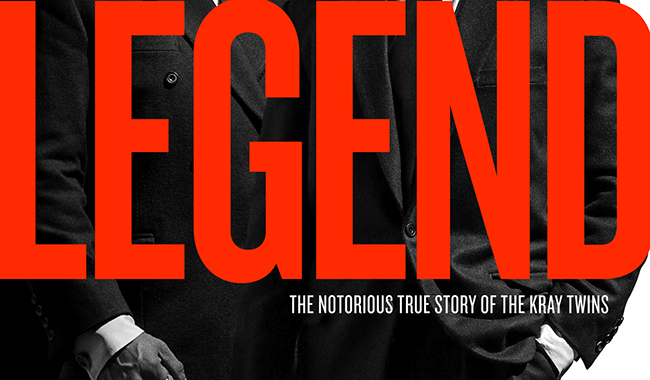 Tom hardy goes double this time round in a portrayal of the Kray twins, two of the most infamous London gangsters from yesteryear.

The focus of the plot sees Ronnie and Reggie already established as “business” owners, but much more renowned for their work as local gangsters. They have arch rivals on the scene (a scene stealing Paul Bettany to look out for here) and the police are already parked outside the house ready to follow them on a day to day basis.

Ron is recently released from the psychiatric ward, against the advice of the doctor and the two of them set about growing their wealth and reputations across the town.

Into the mix Reggie meets Frances (Emily Browning) and spends his time pleasing her whilst shielding her from his more untoward dealings in life.

The film then divides into two distinct narratives. The ins and outs if the brothers business and relationship and the one that Reggie has with Frances.

Both narratives are well structured, but are at loggerheads for dominance about what the films is about. Is Ron relegated to the sidelines? Is this purely then Reggie’s story? Is it about love and loss? The film can’t seem to decide.

What it is well worn into the narrative is a wicked sense of humour throughout. Yes this Kray’s movie is large part comedy – despite the violence and character drama that ensues, Legend is perhaps one of the funniest films you will see all year round. And it manages this without making too much of a mockery of the drama as well.

Hardy plays Reggie as suave, always on his toes, thinking and ready to swoop up his audience off their feet as he does business, or romances Frances. He’s a liar and a cheat, but at heart he wants everything to flow smoothly as possible.

Enter Ronnie, a jowling, lumbering mood killer for any room. It’s amazing how slight adjustments to ones posture can make all the difference here, and Hardy’s Ronnie Kray is yet another notch on his belt of powerhouse performances.

Brian Helgeland directs his cast well and gives the film a sometimes otherworldly feel to the scenes that the Krays enter. It’s their world we are living in, and it isn’t dampened down by perhaps a mood or feel that a British director may have given the film.

The film falls short of itself towards the end as it slowly runs out of steam – perhaps due to the conflicting narratives unable to decide perhaps how to best climax together. But in the end we can see that parallel in the brothers. Which one really is more in control? Perhaps neither.