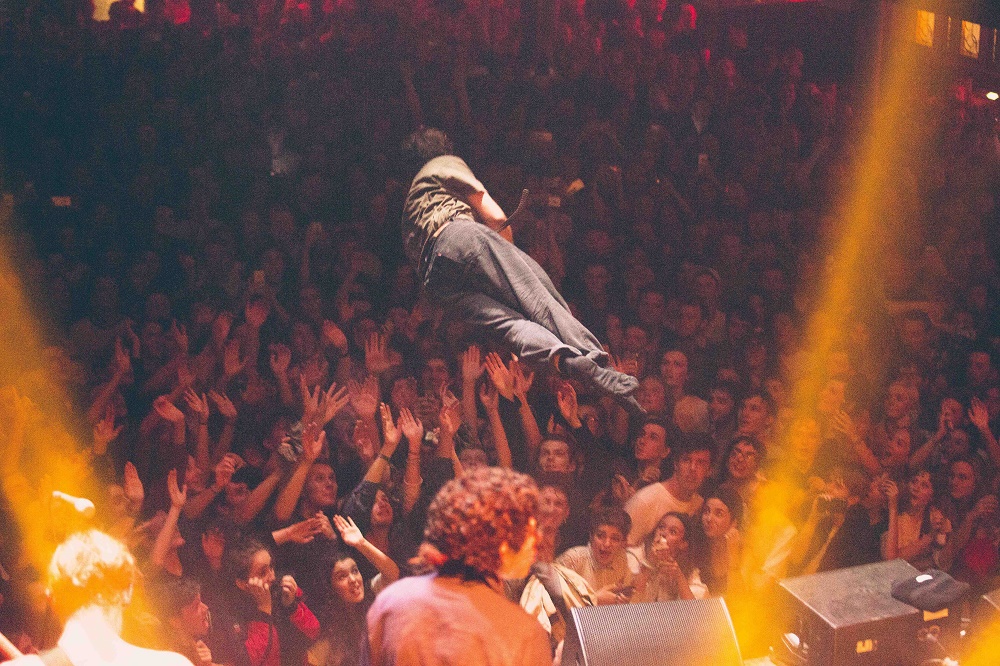 The people behind Beacons Festival know how to curate a line up, and this year’s inaugural Beacons Metro festival is no different – except the risk of a soggy weekend in a field is now nil as the festival takes to the northern cities.

For the Manchester leg of the proceedings, guitar-led indie is the flavour of the evening as a bill of next-big-things support man of the moment, Mac DeMarco. It’s evident by the hordes of gig-goers dressed similarly to the man himself that the cult of Mac is now stronger than ever.

Local band Spring King start things off loud as they rip and roar through a tenacious set. All eyes are on drumming lead singer Tarek Musa as his posse of guitarists dutifully shred around him. There’s an interesting assortment of sounds and influences evident – indie pop mixed with surf and punk. Choruses are sung in unison and notes are played with frenzied vigour – all to the polite head nodding of the decent early turnout.

Just like any other festival, one has to debate getting food or watching a band. In this case, sustenance is chosen (sorry Horsebeach), so up next are London quartet The Big Moon. It’s a performance full of contrasts. Distorted guitar is juxtaposed against soothing gushes of “ooh-ohh-ohh”. Juliette Jackson switches from looking slightly awkward on stage to being a badass rock queen with the instant strum of her guitar. The band’s take on Madonna’s ‘Beautiful Stranger’ is gritty and sublime. Here is a band you just want to be gal pals with.

It’s a change of pace as Kevin Morby follows with his dulcet tones. It’s perhaps at first too soothing after the garage rock of The Big Moon, however the pace picks up gradually through his set as folk switches to rock. There’s a strong Bob Dylan feel to him, and just like Bob himself, Kevin Morby nails it on both the acoustic and electric guitar.

Finally, it’s Mac DeMarco. His latest EP might be his most mellow effort yet, but the atmosphere tonight is anything but. He starts off his set with ‘The Way You’d Love Her’, setting off a mass sing-along that continues with ‘Salad Days’. People swoon and sway and it’s clear that Mac has everyone in the palm of his hands.

The set list is naturally heavy on songs from the latest EP ‘Another One’, and it’s a testament to the power of the band that people can mosh to the most chillax music ever. Midway through ‘Chamber of Reflections’ has the singer proclaiming “fuck yeah, Manchester” whilst waving his microphone stand in the air. It’s unexpectedly raucous stuff for a song more associated with staring at the sky. Older material get the biggest cheers, as tracks such as ‘Ode To Viceroy’ and ‘The Stars Keep On Calling My Name’ prompt more sing-alongs and swaying.

Various items are thrown on stage, including numerous bras that find themselves adorning guitars and being worn as hats. A special mention must be made for guitarist Andy White who throughout the whole set dances and fools around topless and shoeless. At one stage, he throws his guitar up in the air and catches it, and as if to show it wasn’t a fluke, repeats the act to cheer of all.

The set wraps up with an energetic performance of ‘Still Together’, where a Michael Jackson impersonator appears onstage in a bizarrely fitting end. As MJ moonwalks and plays keys, Mac stage dives and is swallowed up by the adoring crowd.

For the encore, the band re-enter the stage walking like giants – and it’s a gigantic barrage of sound that follows. A cover of Rammstein’s ‘Du Hast’ is followed by a hilariously long take on Metallica’s ‘Enter Sandman’, to be finished off with a rendition of Deep Purple’s ‘Smoke on the Water’. The red strobes give the heavy end a fittingly sinister vibe.

If the Manchester leg is anything to go by, Beacons Metro is a fitting answer to providing hot acts alongside new music without the need for a drive to Skipton. Beacons Metro continues over in Leeds across a number of venues; Belgrave Music Hall, Canal Mills, Wharf Chambers and the soon to open Headrow House – where 30 acts will grace the music loving city over 12 weeks. Make the most of your gig-going salad days and get on it.