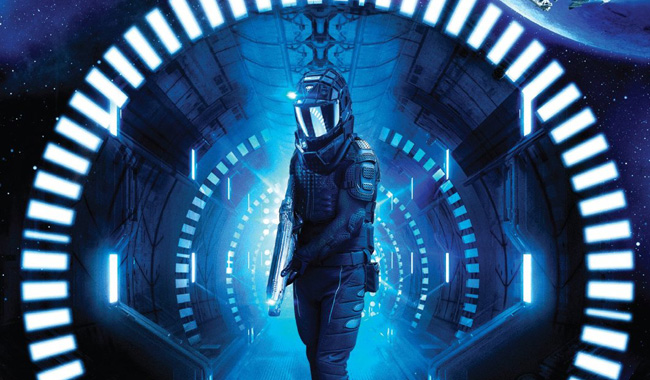 Despite walking the well worn path of “hard-arse space marines in dimly lit corridors”, Shane Abbess’s Infini showed some promise. Eschewing hulking starships in favour of ‘Slipstream’ teleportation technology (which can corrupt the “data’ of whoever uses it) there was the potential for an intriguing dose of military sci-fi. Unfortunately the only corruption on display is a highly derivative and lacklustre plot.

Whit Carmichael (Daniel MacPherson) seeks to defy Earth’s crippling 95% poverty rate by joining an elite military force charged with maintaining the off world colonies. A bummer of a first day sees him stranded on the titular Infini, Earth’s farthest flung territory and ground zero for a horrific biological contagion. A second team, featuring Luke Ford, Grace Huang and a barely present Luke Hemsworth, is sent to retrieve him and neutralise any threat posed to Earth itself.

Any film like this will inevitably draw comparisons to movies such as Aliens, Doom and Event Horizon. However Infini is undermined by an almost copy and paste mentality. The story hinges on the audience’s familiarity with the tropes and conventions of military sci-fi, rather than building on them within the context of it’s own universe.

A cheap and lifeless cityscape fails to emulate the cyberpunk sprawl of Blade Runner and Total Recall. A conspicuously outdated control room strains for the retro-futurism of the 1980s. 28 Days Later lends the Rage Virus to proceedings. There’s even a jarring nod to Ash’s ‘Perfect organism’ dialogue from Alien, during one of the film’s many exposition dumps – all of which emphasise the faults in the film’s pacing.

The actor’s performances are not bad overall, they just have little to work with. MacPherson does well with an awkward script (and Ford provides some genuine humour), but there is barely any character development, making it almost impossible to care about anyone.

With a slow burning plot, Infini could have delivered something special. If it had replaced the Rage Virus with the psychological and biological effects of the Slipstream technology, it would have had a compelling thread to weave the rest of the story around. Regrettably, this wasn’t to be.

We’re informed that the Slipstream dilates time – turning minutes on Earth into hours on Infini; which is, unfortunately, a good analogy for what sitting through this feels like.