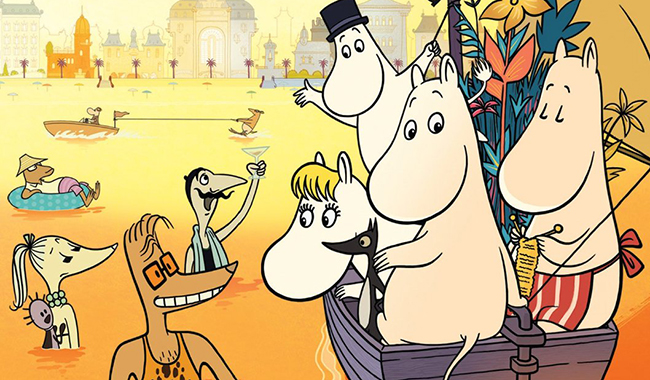 Moomins On The Riviera Review

‘Moomins on the Riviera’ is based on Moomin comic strips by Tove Jansson and Lars Jansson which first appeared in the British newspaper  ‘Evening News’ in 1954. This story dates from 1955, and is lovingly reproduced in this Finnish-French animated family comedy film directed by Xavier Picard and produced by Hanna Hemilä. The film was closely supervised by Tove’s niece, Sophia Jansson, the artistic director of Moomin Oy Characters, and it shows.

That said, this film appears to be closer to the satirical drawings in the satirical publication ‘Garm’ that Tove made during the war (with some hidden Moomin characters) than a proper Moomin story.

The English version features the vocals of Russell Tovey (Moomin) and Tracey Ann Oberman (Moominmamma), who are perfectly cast and not too starry to detract from  viewers immersion in the characters. There are no extras, which is a shame, as I would have liked to have seen behind the scenes of the animation or heard more about the history of the story.

Most of the action is set away from Moominvalley and follows the adventures of the Moomins, Snorkmaiden and Little My as they go off on an adventure to the Riviera (following a delightful encounter with comic pirates whose treasure funds their expedition). I’ve always enjoyed the stories involving sea journeys, particularly the novel ‘Moominpappa at Sea’, so I found the sea voyage a really exciting part of the film.

Once they conquer the obligatory storms and desert islands, they land in the Riviera and are dazzled by what they find. It’s a gentle comedy that ensues, following the Moomins through their mishap adventures as innocents in the world of money, playboys and luxury goods , finally finding themselves and realising  that home and family are the most important things in life. All ends well with the family returning to Moominvalley unscathed and having learnt some moral lessons, reuniting with some of the much missed characters from home. It was a shame not to have the Groke, Hermulen, Snufkin or Mimble et al. really feature in the story as one would expect from a Moomin feature film. However, this would not have been faithful to the original comic strip story, and for that the film makers must be applauded.

Both the story and the art direction were faithful, and the colour palette was also chosen from Tove’s preference.  It has a lovely classic look, and watching a gentle traditional animation has a lot of appeal in a time where everything in animation currently seems so busy and fast paced. The film is a defiantly 2D and old-school animation with no computer interference and is all the better for it.

I did however, find the story not very compelling, and think it would perhaps have been better as a short film, but that is perhaps just a matter of purely personal taste. The sight of Snorkmaiden in a bikini was also rather disturbing!  Whilst meriting a U certificate fairly, I did feel that the film would be slightly too sophisticated for younger children as a lot of the jokes and references would have gone over their heads. The story is as much a commentary on the post war glamour, art and ultimate obsession about money and class than an adventure story of childrens’ characters. That said, it is a very enjoyable cartoon and definitely one for serious Moomin fans.