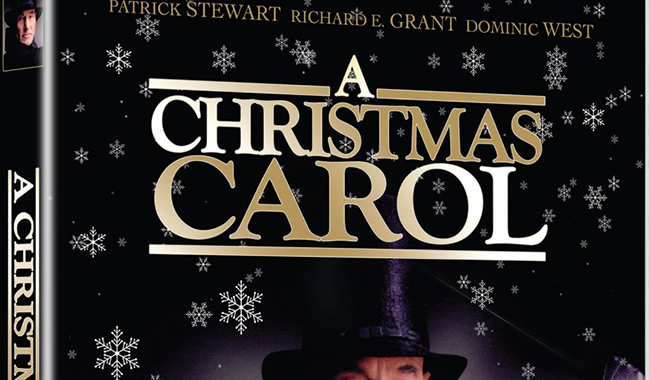 David Jones’ 1999 adaptation of Charles Dickens’ classic tale, starring Patrick Stewart as Scrooge has by now become a classic itself, many of its superb cast – such as Richard E. Grant and Dominic West – household names in drama and film.

A Christmas Carol has been adapted for screen and stage many times, including perhaps the most memorable version starring Alastair Sim as Scrooge in 1951, as well as The Muppet Christmas Carol and Scrooged starring Bill Murray. Stewart himself played Scrooge in a one-man stage show from 1988 until 1993 in an Olivier Award winning performance.

Jones’ version definitely ranks among those that stay truest to its source material. It opens on Christmas Eve in 1843 to the burial of Ebenezer Scrooge’s long-term business partner Jacob Marley. By way of goodbye, Scrooge promises to continue their business in the way they have been doing it for years – “thriving on the idleness of others” – clearly not quite knowing what he is putting himself in for, completely oblivious to the consequences of his actions. They come back to haunt him seven years later, when Marley’s Ghost (Bernard Lloyd) appears at Scrooge’s house on Christmas Eve, unable to find rest in the afterlife as punishment for how he lived his life as “a good businessman”. Marley announces the arrival of three ghosts that will confront Scrooge with his past, present and future. Scrooge’s journey with these ghosts in this adaptation includes many scenes from the book that tend to get omitted from other productions, such as the Ghost of Christmas Present showing Scrooge the different kinds of people celebrating Christmas day, including lighthouse keepers, sailors and miners. Sets and costumes all strive for authenticity, right down to the Cratchit family’s teeth. Richard E. Grant as Bob Cratchit in particular looks the part and his subtle and beautiful performance almost outshines Patrick Stewart’s award-winning one.

The productions sometimes minimalistic lighting underlines the bleakness of Scrooge’s life in general and his Christmas in particular. It also tends to make the interior scenes look like a stage production. Dating back to 1999, the effects obviously aren’t state-of-the art in 2015 but that hardly matters. Marley’s ghost and the Ghost of Christmas Yet to Come in particular are spooky enough to frighten younger audiences and perhaps even give adults a bit of a shiver. The Ghosts of Christmas Past (Joel Grey) and Present (Desmond Barrit) may be unintentionally funny in their campness.

Stewart’s Scrooge is much more than just the cliché capitalist miser that Dickens’ tale clearly takes issue with. In this production, Scrooge is revealed to be a man, made miserable by repeated profound loss and rejection. It is almost as if he is trying to compensate for his personal losses by as much financial hoarding as possible. At the same time, Dickens’ and the film’s criticism of Scrooge as representative of a society that is only interested in its own gain, refusing to look after those of its members most in need, is very much present and as relevant as ever.

Sadly, the DVD extras are a bit thin, limited to two two-minute behind-the-scenes featurettes and biographies of cast and crew, even though watching Patrick Stewart speak about his particular relationship with the material is a delight. Also, the film’s 4:3 aspect ratio is a bit annoying. Still, this production with its wonderful cast, award-winning cinematography and authenticity to Dickens’ classic is highly watchable.

Ultimately, A Christmas Carol is of course the story that celebrates the Christmas spirit through one man’s transformation and redemption to the benefit of everyone around him. The supernatural element is indication of how little Dickens himself believed in the likelihood of that or the story’s conciliatory, feel-good ending to happen. It hardly matters. This is a Christmas story after all and a version that audiences may, as Patrick Stewart hopes, enjoy watching for years to come.