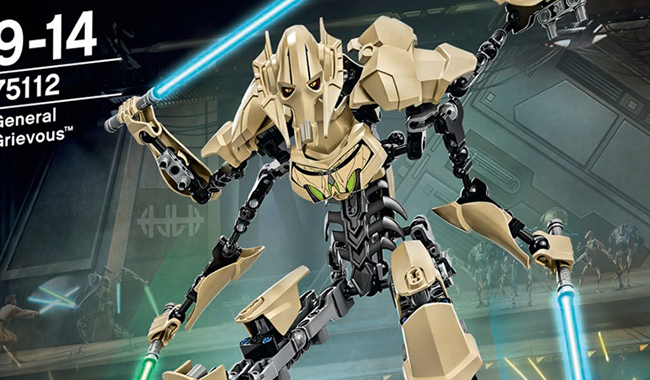 Lego has been creating buildable figures on and off for a long time from the Bionicle theme to the Marvel Superheroes line. While Bionicle has always had its own fans, the other series have always been a little hit and miss. The figures in general have had neither a typical Lego look nor a very accurate look which has always made me stay away from them as display pieces. However, when reviewing the latest run of Star Wars buildable Lego figures, one figure immediately stood out from the line up.

The full line up of buildable figures is certainly full of recognisable names with Jango Fett, Clone Commander Cody, Obi-Wan Kenobi, Luke Skywalker and Darth Vader in addition to General Grievous. Overall the quality of these offerings is much improved from some of the previous attempts, but Lego will always struggle to compete with an action figure on the pure looks due to the inherent qualities of Lego.

Grievous however, who is mainly a robotic figure, does not suffer from the same problems. You expect the skeletal core with its ball joints and arms and legs made up of tubes. None of it ever looks out of place which really is why this is the best figure in this line up.

General Grievous is the cyborg Supreme Commander of the Confederacy and one of the main villains of Episode III: Revenge of the Sith and the Clone Wars series. His menacing look and the incredible duel with Obi-Wan Kenobi using four lightsabers certainly makes him one of the more memorable villains of the prequel trilogy and therefore worthy of a figure like this.

The design of the buildable figures is generally pretty standard consisting of technic style ‘skeleton’ on which armour pieces are added to create the figure’s final look. For General Grievous, there is only one unique piece which of course is the finely moulded head that captures the look of Grievous very well. All the other armour pieces are common from many Bionicle and other buildable figures in the past.

The build itself is very straight forward. There are a lot of ball joints which attach together easily with some technic pins to give further stability where needed. The leg design is particularly impressive with double shaft design legs which not only look very impressive but also give the figure a very stable base while still retaining plenty of movement for any reasonable pose.

The arm design takes into account the ability of General Grievous to be seen with two hands or four, where the two arms of each side can be snapped together. However, this unsurprisingly does create a very thick look to the arms and in any case, the figure looks much more impressive with all four arms holding lightsabers in battle.

One thing to note is just how large the figure actually is when built. In a normal slightly hunched over pose, the figure still measures around 12 inches tall. Most of the pieces used are also of quite a large size which in itself makes the figure much easier to build than the age range on the box would suggest.

If you like to display Lego sets, the General Grievous set is certainly worth a look. There isn’t a complicated and long build but the final look is very convincing at a very low price compared to other sets you wouldn’t mind your friends to see.

The combination of black and gray interiors and the tan coloured armour works perfectly and while normally the visibility of the skeletal interior on buildable figures looks out of place, on Grievous it looks perfect and even adds to the look.

There are no stickers on the set which ensures a consistent look by any builder.  The head and the chest piece are printed mainly with the ‘organic’ parts of Grievous, showing his gut sack and facial features. They are very nicely printed giving a nice bit of detail to the parts without overwhelming the figure and allowing the Lego pieces to create the desired look.

You get four lightsabers included in the set, two in green and two in blue just like in the film. Aside from these, there are no further props included. If anything, a cloak would have looked good on the figure as Grievous does wear one outside of the battle scenes in the films. Both Darth Vader and Obi-Wan Kenobi figures come with cloaks, so this should have been possible. The figure does look a little ‘thick’ when directly compared to the stick thin look of Grievous in films, but this does not look at all out of place when viewing the figure normally. The ability to combine the arms is a nice touch but the look isn’t nearly as good as when separated and is probably best left as a play feature.

The figure is definitely strong enough for use in play as well and the movement and poses available will put most action figures to shame. Certainly if you also bought the Obi-Wan model, you could easily replicate the Episode III duel.

At £29.99 and 186 pieces the price per piece count is obviously not in line with the usual Lego price point, but as mentioned most of the pieces in the set are larger than the average. Grievous is also the most expensive of the buildable Star Wars figures which range from £14.99 for Jango and Cody, £19.99 for Luke and Obi-Wan and £24.99 for Darth Vader. However, I feel the price point for this is justified as the set has twice as many pieces as the smaller sets and also more complexity in design.

All in all then, this is a superb figure that really stands out from all the previous buildable figures released by Lego. Obviously in large part this is down to the subject which lends itself so well to this kind of building, but this cannot be held against it.  For anyone with even a small affection to the prequel Star Wars films the General Grievous can be highly recommended whether as a display piece or as a figure for play.