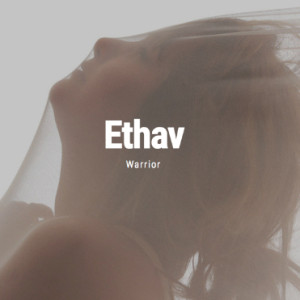 Warrior is the second single from London based electro-pop artist Ethav, a young woman with a bright future. Ethav was born and raised in India by Persian parents before moving to Los Angeles as a teenager. Originally looking to act, she turned to music instead and is doing a very good job of developing a style all of her own.

The track is a call to arms, a clarion that begins a fight for survival against the odds. Warrior throbs and pulses, mixing what sound like classical influences with a very modern vibe. Starting softly with ethereal vocals that soar quite beautifully, the pace soon picks up. An insistent drum beat pushes it forwards and Ethav shows us she has vocal power aplenty.

This song was written, sung, programmed and produced by Ethav, so she clearly has a multitude of talents. It’s a deceptively simple sound, and a few listens are required to pick up all of the subtle rhythms and shimmering sounds that lie behind the main vocal. Yet there is passion aplenty in both the lyrics and the quite lovely vocal delivery.

Ethav has a wide range of influences, and this track combines modern and much older sounds. The unusual combination works very well, and the end product is striking. I have a feeling we are going to be hearing a lot more from Ethav.